IBM researchers say they are the first to use a graphene photodetector in a 10 GBit/s optical communication link. 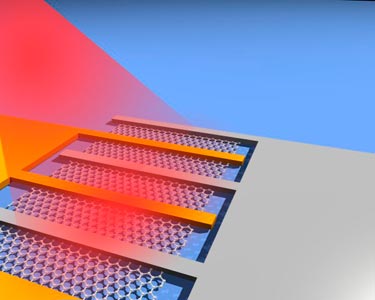 Researchers at IBM have deployed a graphene photodetector in an optical communication link for the first time. The link operated at a speed of 10 Gbit/s at 1.55 µm and the team says that error-free detection was achieved (Nature Photonics doi:10.1038/NPHOTON.2010.40).

"This is the first application of graphene in an optical communication link," researcher Fengnian Xia from IBM's Thomas J Watson Research Center in New York told optics.org. "The strong photoresponse of graphene was reported by us and a few other groups in 2008. Last year we demonstrated for the first time that such photoresponse is intrinsically high speed (>40 GHz). In this current work we have managed to improve the photoresponsivity by a factor of 15 when compared with our previous demonstration."

Graphene, a single layer of carbon atoms assembled in a honeycomb structure, is today the subject of intense research and is rapidly gaining a reputation as a "wonder material". This is all thanks to the material's properties. For example, graphene does not have a bandgap, which permits operation over an incredibly wide wavelength range. It also has remarkably high electron mobility at room temperature.

Despite these advantages, when it comes to photodetectors there is a significant problem to solve: electrons and holes created in the bulk of the material normally recombine very quickly. As a result, there are no free electrons to produce a photocurrent.

"The absence of a strong electric field in the bulk graphene sheet, where most of the electron–hole pairs are generated, leads to carrier recombination without any contribution to the external photocurrent," explain Xia and colleagues Thomas Mueller and Phaedon Avouris. The answer was to use one set of electrodes made of palladium/gold and a second set made of titanium/gold in a so-called "asymmetric metallization scheme".

"If both electrodes consist of the same metal, the built-in electric field profile in the graphene channel between two neighbouring fingers is symmetric and the total photocurrent is zero," explains Xia. "Here, we demonstrate that an asymmetric scheme can break the mirror symmetry of the built-in potential profile within the channel, allowing for the individual contributions to be summed to give the overall photocurrent."

Although the team operated its photodetector at 1.55 µm, it also reports seeing a strong photoresponse at 514 nm, 633 nm and 2.4 µm. "The gap-less nature of graphene enables it to operate at different wavelengths," commented Xia. "In this line of research one obvious next step is to use wafer-scale graphene instead of flakes produced by mechanical exfoliation. Terahertz generation and detection, remote sensing, and surveillance are other possible applications."