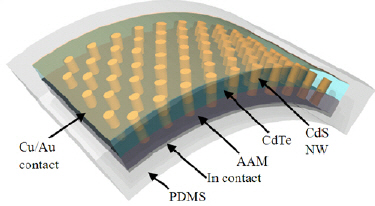 Researchers at the University of California at Berkeley report on a new way to fabricate highly ordered nanopillar-based solar-cell modules with promising light-conversion efficiencies. The technique could be compatible with roll-to-roll processing, which potentially brings down costs, and the modules can be made flexible without significant loss in performance.

Ali Javey and colleagues employed anodized alumina membranes as the templates for making single-crystal n-CdS nanopillars using a vapour-solid-liquid (VLS) process. The researchers deposited a thin layer of gold seeds in the highly regular pores that form in the aluminium foil substrate after anodization. These seeds serve as catalytic particles for VLS growth of the nanopillars, a process that produces ordered structures whose orientation can be controlled.

"The nanopillars we produced could be used to develop a robust technology for low-cost and lightweight photovoltaics with respectable efficiencies," he told our sister website nanotechweb. "Our work could have important implications for the large-scale integration of solar modules for a wide range of applications. There are still a lot of challenges ahead of us, but the work shows the potential of our technique." 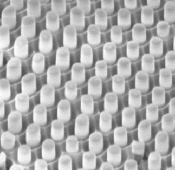 The team, which includes researchers from the Lawrence Berkeley National Lab, now plans to further enhance light-conversion efficiencies in the devices. The first thing that they will do is optimize and/or replace the top contact material, which is currently causing a 50% loss in the optical transmission. "We will also explore other materials systems by using our device structure and fabrication approach and try to make the technology more viable for large-scale integration," added Javey.

In particular, the researchers will try to replace the cadmium-based materials used in their devices, because the metal is highly toxic.

The work was reported in Nature Materials.

• This story first appeared on our sister website nanotechweb.