Diodes with stable lasing at 638 nm meet the requirements of picoprojection systems. 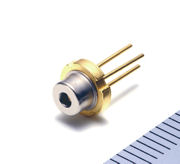 High-power red laser diodes emitting at 660 nm have become something of a commodity for recordable DVD players, but this wavelength isn't ideal for compact projectors that require red, green and blue laser light sources. That's because red light at this wavelength appears dark to the human eye; moving to a shorter wavelength increases the perceived brightness of the light source even at the same output intensity.

As a consequence, projector manufacturers are keen to exploit short-wavelength red laser diodes for their lower power consumption and better safety performance. The only catch is that performance and reliability become compromised at shorter wavelengths, which has so far limited the use of short-wavelength devices for this application.

Mitsubishi has optimized the diode design to meet the needs of the three main types of compact projectors. For illumination-based projectors the key requirement is high-power output, while for holographic and laser-scanning systems the priority is to achieve good singlemode characteristics with a more modest power output.

In contrast, the single-mode characteristics needed for holographic and laser-scanning projectors are achieved by a ridge-type diode design that Mitsubishi originally developed for the 660 nm lasers used in recordable DVD equipment. "A ridge in the slow-axis direction gives these laser diodes a structure for trapping light in the basic mode," said Mönchmeier. "Since this ridge-type laser diode requires once-only crystal growth and accommodates mass production, it has become a standard structure for DVD-R laser diodes."

These ridge-type lasers offer good linearity at low output powers, but deviations set in at higher power levels. This so-called kink effect disrupts the far-field pattern in the slow-axis direction, and is thought to result from higher-mode lasing caused by heat generation inside the laser diode. As a result, the maximum output from these lasers is in effect defined by the power level at which kink occurs.

According to Mönchmeier, the simplest way to increase the kink level is to limit the temperature rise in the laser diode during operation, and that in turn can be achieved by using a long resonator to lower the thermal resistance of the diode chip. The problem here is that the resonator also increases the threshold current, reduces the slope efficiency, and brings with it the side-effect of reducing the electricity-to-light conversion efficiency. Mitsubishi has therefore developed a low-loss waveguide structure that reduces the resistance of the waveguide and compensates for the effects of a longer resonator length.

For the 638 nm singlemode diode, designated the ML5xx54 series, Mitsubishi selected a resonator length of 1500 nm. The window structure is also treated with a zinc dispersion to avoid instantaneous optical damage to the edge surfaces.

"This laser diode provides kink-free operation at an output power of 140 mW even at temperatures of up to 55 °C," said Mönchmeier. "The far-field of this laser diode indicates Gaussian patterns for both slow and fast axes, and the diode has excellent beam quality. These characteristics are ideal for holographic and flying-spot laser projectors."

Mitsubishi Electric is exhibiting at LASER World of Photonics in Hall B1, booth 680.