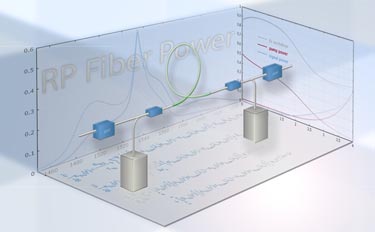 It's got the power

The new version of the RP Fiber Power simulation software can help optical designers to fast-track the development and optimization of fibre amplifiers and fibre lasers for a range of applications, claims RP Photonics Consulting, Switzerland.

"Industrial companies, research laboratories and educational institutions can all benefit from the software's ability to assess the impact of various detrimental effects on the performance of fibre lasers and amplifiers," commented Rüdiger Paschotta of RP Photonics. "Predicting the performance of active fibre devices – for example, by finding the optimum fibre length, doping concentration and refractive-index profiles – is a key benefit."

Version 2.0 of the package will be available at the LASER 2009 show in Munich next month and has several new features. For a start, the software is now able to account for radial dependencies of doping concentrations and optical intensities, resulting in a higher precision for devices based on double-clad fibres. The software can also simulate an optical pulse's temporal evolution – for example, in the distortion of a pulse by gain saturation in a fibre amplifier.

"The result can be a reduction in time and expenditure for the development of new devices and a better understanding of the technical details involved," said Paschotta.

As well as technical support for the RP Fiber Power package itself, advice from RP Photonics on related technical issues is also included in the licence fee. "Support is not limited to details of the software, but also covers more general consultancy on relevant matters," noted Paschotta. "The combination of software and support that we offer is intended to help development projects achieve rapid progress."