The photonics sector in Belgium has turned the country's location and a tradition of flexible entrepreneurship to its advantage. Tim Hayes speaks to the leading players.

Belgium's proximity to Europe's commercial and manufacturing heartland has historically produced a pragmatic attitude among its industrialists. For decades, the country maintained a substantial steel industry despite the absence of domestic iron ore deposits. Producers simply imported all the ore that they needed.

"That is a common characteristic of Flemish entrepreneurs: a high degree of versatility and an ability to develop despite obstacles," said Hugo Thienpont of the department of applied physics and photonics at Vrije Universiteit Brussel. "They are flexible, they adapt and today they are starting to understand that photonics gives added value to their products and is therefore an interesting area to work in."

Thienpont has promoted photonics technology in Belgium for many years, and has seen the sector develop rapidly. "There are many strong photonics companies here and they all have a slightly different story. Some were already present but originally active in other markets. Others are younger companies and start-ups, including several from here at Vrije Universiteit Brussel. And there is IMEC, originally the Flanders Inter-university Microelectronics Centre but today a world-leading independent research centre in nanoelectronics and nanotechnology, which has produced a number of start-up companies and innovative technologies."

It was not always so. Thienpont gathered industrialists together 12 years ago to discuss what photonics could offer them, but he was met with a lukewarm response. "They believed that engineers specifically trained in optics were not needed. A group of us felt differently and created a pioneering programme in photonics at the university. Today our students find work immediately, even in a difficult economic climate. Photonics expertise is indispensable."

Market pull, not technology push
IMEC is a dominant feature on the country's technology landscape. Established in Leuven by the Flanders government in 1984, it is now one of the largest independent R&D organizations in its field, active in fast-moving nanoelectronics and nano-technology sectors such as photovoltaics and silicon photonics. 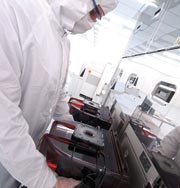 "Our work on silicon photonics is a good example of IMEC's strength: the integration of different technologies into practical systems," said Ludo Deferm, IMEC's executive vice-president. "Our aim is to look at the needs of the market and to see how integrating photonics on silicon can lead to real benefits in performance and reduced costs, as well as providing compatibility for future developments to build on."

IMEC and its associated laboratory at Ghent University develop photonic components and systems-on-a-chip for use in communications and sensor applications. Recent breakthroughs include new fabrication processes based on 193 nm lithography, enabling waveguides to show nanometre-scale uniformity of critical dimensions.

"Advanced applications, such as silicon photonics, are today governed by market pull, not by technology push," commented Deferm. "There are many applications where photonics could be widely used if the technology can be made reliable enough, cheap enough and deliver the performance needed. The way to achieve that is to see how the technology can fit in with other developments as part of larger integrated systems, rather than push the technology forward for its own sake."

Equally important is an international perspective. IMEC works with industrial partners all over the world. "These are global technologies with global effects, and we do not believe that you only act locally," added Deferm. "If a technology is to be genuinely useful, then it has to be useful for everyone. The time for technology companies to carry out their work in isolation is over."