A pulsed deep-ultraviolet (DUV) light source could be a more stable alternative to continuous-wave (CW) technology for high-precision semiconductor mask inspection, according to developers at Megaopto, Japan. The fibre-laser-based source emits a wavelength of 199 nm and offers a linewidth of less than 1 GHz, which is suitable for advanced optical inspection applications (Applied Optics 48 1668).

"We have built a coherent DUV light source, which emits one of the shortest wavelengths ever generated using a fibre laser as the fundamental source," Megaopto's Yoshiharu Urata, told optics.org. "Our aim was to construct a robust, high-resolution, short-wavelength light source for the high-precision inspection of semiconductor masks."

The Megaopto team opted instead for a pulsed-laser scheme, where single-pass wavelength conversion and a simple solid-state laser design are possible. The group developed a high-pulse-repetition-frequency DUV source generated by multistage wavelength conversion. The key to the design is the generation of high-frequency pulses (2.4 MHz), which means that the laser can be considered a quasi-CW source. 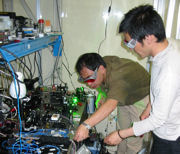 "The challenge was to obtain all properties required for advanced inspection simultaneously – sufficient power, narrow linewidth for high resolution and fast pulse-repetition rate," explained Urata. "The performance obtained using our DUV laser is as good as with a CW laser, while the reliability is significantly improved by opting for a pulsed regime."

Megaopto is now working on improving the light source for practical industrial use. "Currently, our DUV source emits 50 mW output power," concluded Urata. "A practical optical inspection laser needs to emit over 100 mW output power and should operate for over six months with little downtime."