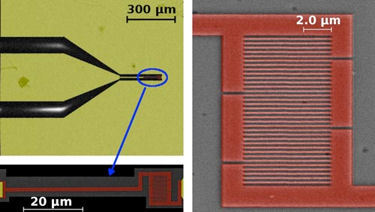 Researchers in Italy believe that a parallel arrangement of superconducting nanowires could pave the way for high-performance, large-area single photon detectors. According to the team, the detectors could be useful in many different applications such as quantum communication, quantum cryptography, biomedical and time-resolved fluorescence and 3D imaging.

The key to the device is the extreme energy sensitivity of niobium nitride nanowires at cryogenic temperatures. In these nanowires, the conduction electrons have the remarkable property that a phase transition, from a superconducting to a resistive state, can be induced by the absorption of an energy as low as 0.25 eV corresponding to a single photon with a 5 µm wavelength.

The high sensitivity in energy is achieved by using nanowires with a very small transverse area. The nanowires are realized by depositing an ultra-thin film of niobium nitride, which is successively patterned through electron-beam lithography and reactive ion etching. To achieve a reasonable area coverage a very long meandered nanowire has been used, but this detector configuration is not well suited to meet the demands of higher energy sensitivity or large-area coverage because it loses speed, due to a large inductance.

In a recent study, which was published in Superconductor Science and Technology, the authors showed that parallel nanowires can be used to significantly increase the area coverage with no loss in key detector characteristics such as efficiency and speed. In the parallel configuration, a large and fast signal is generated because the photon induces a cascade switch of all the parallel nanowires to the resistive state.

A total of 24 such nanowires in various configurations were used to show that the possible detector area increases with the square of the number of parallel nanowires used. The successful operation of a single photon detector in which all 24 nanowires were connected in parallel demonstrates that an increase in area coverage of up to at least 100 µm × 100 µm should be obtainable with a detector speed comparable to current 15 µm × 15 µm nanowire detectors.

Back in the lab, the team is concentrating on the fabrication of large-area detectors as well as on characterizing the influence of parallel nanowires on other detector characteristics such as the photon arrival time resolution and the noise.

• This article first appeared on our sister website nanotechweb.org.