Fingertip control of a set of optical tweezers offers users an intuitive method of particle trapping and manipulation.

The optics community could soon be getting its hands on a user-friendly holographic optical tweezer system thanks to UK researchers. A team from the Universities of Bristol and Glasgow have developed a multitouch console that enables users to control multiple optical traps using their fingers (Optics Express 5 3595).

"We can generate an optical trap at an arbitrary coordinate by simply touching the table where you want it to be and then operate on these," Mervyn Miles, a professor at the University of Bristol, told optics.org. "Each trap can then be manipulated by simply moving one's fingers over the table to the desired location."

The ultimate goal of the UK team is to enable the wider scientific community to use optical tweezers in an intuitive and natural manner. In particular, non-specialists could use the multitouch system without having to understand the underlying optics, allowing them to concentrate on the task in hand.

Miles and colleagues hope that their user-friendly tool could open up new applications in biological and medical fields. "The multitouch interface will enable users to trap, manipulate, modify and operate on living cells at will," explained Miles. "In fact, the multitouch table could become a platform whereby nanotools, controlled by holographic optical tweezers, are used to perform single-cell microsurgery."

Until now, previous examples of control interfaces for optical tweezers have comprised a joystick or glove (see earlier optics.org article (March, 2007), which can manipulate only a handful of particles at a time. The multitouch table allows users to operate a large number of traps simultaneously with one or more users operating the system at a time. 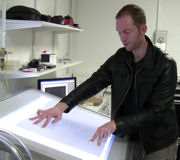 A user creates an optical trap by touching the screen at the desired location. Optical traps follow the user's fingertips as they move over the surface. When the user removes his or her fingers the optical traps are destroyed.

In the multitouch setup, a PMMA waveguide measuring 100x80x1 cm is edge-illuminated with 880 nm LEDs so that total internal refection occurs within it. An overlay of drafting paper, which has an image of an optical microscope projected onto it, is placed above the waveguide.

"Pressing on the screen frustrates the total internal reflection, resulting in infrared light being scattered at this point," explained Miles. "This is detected by an infrared camera viewing the entire screen from below. The traps are superimposed wherever the user has touched the screen and a new optical trap is formed under the user's finger in the optical microscope."

The next step is to make the system faster and more user-friendly. "We want to be able to calculate at least 50 optical traps faster than the update rate of the spatial light modulator," concluded Miles. "This would allow a video-rate feedback, giving the user immediate feedback on their actions."