Quantum cascade lasers have opened up a whole host of important applications in the mid-infrared. Marie Freebody speaks to Federico Capasso to find out about the latest progress in the laser's development and the factors that are shaping its commercialization. 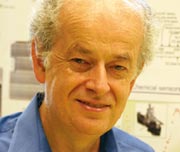 Federico Capasso invented the first quantum cascade laser (QCL) in 1994 along with colleagues at Bell Laboratories, US. He has remained active in the field for 15 years and is now the Robert L Wallace Professor of Applied Physics and the Vinton Hayes Senior Research Fellow in Electrical Engineering at Harvard University, US.

From this point of view, the QCL is an enabling device that allows you to reach all of the mid-infrared spectrum (3–25 µm), a large part of the far-infrared (50–300 µm) and beyond into sub-millimetre wavelengths.