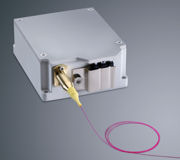 With the unveiling of a new diode module at Photonics West and the announcement of the TruDiode direct diode laser series to be available from mid-year, TRUMPF has signalled its embrace of diode lasers and the end of the road for its lamp-pumped cw sources.

The passively cooled diode module on show in California this week features 100 W of output power from its single fibre optic and a divergence of less than 120 mrad. These modules will form the basis of the TruDiode series, targeted at materials processing applications such as cutting, welding and brazing.

Although the company has not released details of its diode laser technology, it did indicate that the diodes were being manufactured in-house by TRUMPF. "The most important technical challenge was ensuring the highest beam power with maximum bean quality," said Kapp.

More information about the TruDiode series is expected to be released at LASER 2009 in June.

The development of diode sources follows other recent moves by the company to position itself in industrial laser markets, including the acquisition of UK fibre laser specialist SPI Lasers in September 2008.

Speaking to optics.org earlier that year, Jens Bleher of TRUMPF's Laser Technology division signalled the company's recognition of the need to move into new classes of laser to suit market needs.

"We are currently not of the opinion that a new laser technology that will replace all other beam sources will appear in the near future," he said. "A laser manufacturer needs to be proficient in all types of lasers and be able to offer its customers the relevant technologies. TRUMPF will continue to develop all varieties of laser technology in order to offer its customers the best laser for every application in material processing."

Diode sources have now taken their place in that spectrum of lasers.