Know your needs before buying a beam profiler

Precisely measuring the parameters of a laser beam is crucial to using it successfully. Allen Cary of Photon Inc describes the range of beam profiling techniques available.

Most applications for lasers involve trying to utilize the light beam for a specific purpose, either as the raw beam or, more commonly, as a beam that has been modified with optics. Whether printing a label on a part, welding a precision joint or repairing a retina, it is important to understand the nature of the laser beam and its performance. 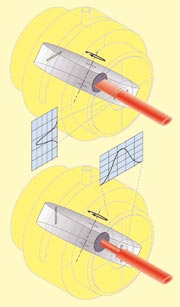 Laser beam profiling provides the tools to characterize the laser and so know precisely what the beam is doing at the point of the work and whether the optics are having the desired effect.

Lasers and laser applications vary in terms of power density, wavelength, depth of focus, beam size, pulse duration and a myriad of other parameters. It is this variety that makes lasers so useful for interacting with and manipulating many different materials and media. But it is also this variety that adds complexity to the beam profiling process.

Profiling technology
Beam profilers come in many types, each with its own advantages and challenges. The basic types can be narrowed into two categories: those based on arrays or cameras, and those based on mechanical scanning apertures, knife edges and other devices. Today camera-based and scanning aperture profilers are the leading techniques for most applications. 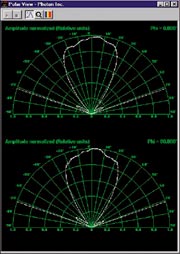 Camera-based systems are generally silicon CCD or CMOS devices, although there are applications that use arrays with pyroelectric detectors and microbolo-meters for detection of longer wavelength lasers. Scanning aperture systems combine a moving slit and a single-element photodetector. Other more specialized instruments, such as the photon goniometric radiometer far-field profiler, use a scanning pinhole aperture to measure divergent sources in the far field.

Over the past few years the technology of camera arrays has improved dramatically, with reduced pixel sizes, high dynamic range digital interfaces, and electronic exposure and gain controls vastly increasing the usefulness of these devices as laser profilers. With the introduction of CMOS cameras, the costs have come down significantly. Speed and jitter control along with high dynamic range electronics have also improved the performance of the scanning aperture instruments, allowing them to achieve submicron precision for both pointing and beam-size measurements.

The availability of USB2 and Firewire (IEEE1394) interfaces for both of these types of profilers has also increased their ease of use and convenience for connecting to laptop and desktop computers.

When selecting the type and model of profiler that is best suited to a particular user's needs, the most important criteria are the nature of the lasers to be measured and the requirements for the measurements involved. There are four basic questions about the profiling operation that need to be answered in order to determine the best type of laser beam profiler to use.

Wavelength
The first is what wavelength(s) need to be measured. The answer to this question determines the type of detector required and the most cost-effective approach. 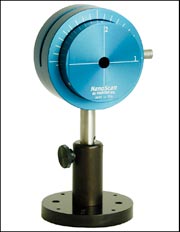 For the ultraviolet (UV) and visible wavelength range, from 250 nm up to the near-infrared (NIR) at around 1100 nm, a silicon detector has the response required to make these measurements. At these wavelengths there are the largest number of cost-effective solutions available, including CCD and CMOS cameras and silicon detector-equipped scanning aperture systems. Which of these is the best choice will be determined by the answers to the other three basic questions, listed later on.

UV beams from 190 to 250 nm can also be measured with CCD and CMOS arrays, but the energetic photons at these wavelengths will damage the arrays. For more than occasional use, specialized UV conversion plates, which convert the UV light to visible wavelengths, should be employed.

For the NIR, 1100–1700 nm, the choices become less abundant. At the lower end of this range, 1100–1200 nm, CCD and CMOS cameras may still work, but above 1200 nm InGaAs, pyroelectric or microbolometer arrays become necessary. These are quite expensive at around five to ten times the cost of the silicon detectors. Scanning slit systems equipped with germanium detectors are still quite reasonably priced, within a few hundred dollars of their silicon-equipped cousins.

At mid- and far-IR wavelengths the pyroelectric arrays and scanning slits with pyroelectric detectors provide viable alternatives, again the best approach being determined by the answers to the subsequent questions.

Beam size
The second question is what beam width or spot size is being measured, which will determine the profiler type.

The limiting factor in the use of arrays is the size of their pixels. At the current state of the art, pixels are at best around 6–7 &MICROm for silicon arrays, and considerably larger for InGaAs and pyroelectric arrays. This means that a UV-NIR beam should be larger than 50 &MICROm in diameter to ensure that enough pixels are lit to make an accurate measurement. InGaAs pixels are at best 30 &MICROm, limiting the minimum measurable beam size to around 250 &MICROm. Pyroelectric array pixels are even larger at 85 &MICROm, meaning that the beams need to be at least 0.5 mm to yield accurate results.

Scanning slit profilers can measure with better than 2% accuracy beams that are four times the slit width or larger, putting the minimum beam sizes at around 4 &MICROm without magnification. Investigators who want to measure their beams directly without additional optics may find this to be an advantage.

Beam power
The third parameter is the power of the beam. This determines the need for attenuation and beam splitting, as well as the detector type. Scanning slit type profilers can measure many beams directly without any attenuation, due to the natural attenuation of the slit itself. The slit only allows light to the detector as it passes through the beam, and lets in only a fraction of the total light.

Lasers with powers above 100 mW can be measured with a pyroelectric detector-equipped scanning slit profiler. Properly designed, these profilers can measure up to kilowatts of laser power. High-power lasers, in the hundreds to thousands of watts, can also be profiled using the spinning or scanned wire techniques.

Continuous-wave or pulsed
The final question is whether the laser is continuous-wave (CW) or pulsed. Lasers that operate pulsed at a repetition rate of less than 1–2 kHz can only be profiled with an array, because scanning apertures simply cannot make these measurements effectively. CW and lasers with repetition rates above 2 kHz can be measured with scanning slits, provided that the combination of the repetition rate and the beam size is sufficient to provide enough laser pulses during the transit time of the slits through the beam to reconstruct a good profile.

Practical issues
Along with these four key questions about the physical nature of the laser to be measured, how and where a profiler is to be used must also be considered. 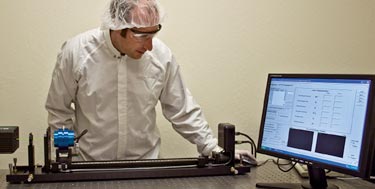 Camera arrays provide a true 2D image of the beam and will show fine structure and hot spots, which a slit may integrate out. Slit-based profilers will generally provide a more accurate beam-size measurement and can measure very small beams directly. Accurate collimation or focus control requires the highest beam-size accuracy. Checking the laser for hot spots, uniformity or beam shape may dictate that the 2D profile is more important than the absolute size measurement accuracy.

For a profiler to be used on a factory floor for a manufacturing step, ease of use, high throughput and reproducibility become paramount. In this case the profiler requiring the least adjustment and attention from the user is generally the best fit.

For any process that uses or works with CW or high-frequency pulsed lasers, the scanning slit will have the advantage of measuring the beam directly, even at its focus point, without additional attenuation optics. The dynamic range of these systems is also broad enough to measure both the focused and the unfocused beam without changing the level of attenuation.

Camera arrays, on the other hand, may not be able to handle both levels of power density without adjustment. This means that, for applications where the beam needs to be brought into focus or measured at various points along its propagation, such as with the measurement of M2 or focusing an optical system, for example, then the slit profiler will tend to be more convenient.

No universal solution
People who are new to the idea of beam profiling are often looking for a one-size-fits-all answer. Although one profiler may be able to measure several different lasers, a truly universal solution simply does not exist.

With all the various wavelengths, beam sizes and power levels available, it is impossible to make one instrument that can do everything. Even the optics involved (the lenses, attenuators, etc) must have anti-reflective coatings that are specific to the wavelengths of use. The art of attenuation can be very tricky and it is possible to introduce error into the measurement simply by using the wrong types of attenuators.

• This article originally appeared in the January 2009 issue of Optics & Laser Europe magazine.