The Hubble, Gemini and Keck telescopes have spotted four new planets outside our Solar System. 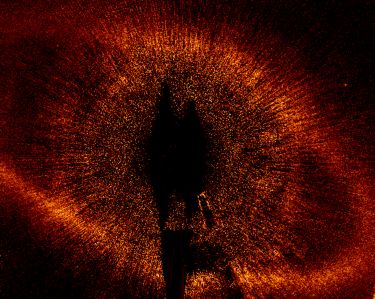 Two teams comprising researchers from Canada, the US and the UK have taken what appear to be the first “bona fide” direct images of planets orbiting stars outside the Solar System, an achievement that has long been considered vital in the search for planets like our own.

Christian Marois of the Herzberg Institute of Astrophysics in Canada and colleagues have used the ground-based Gemini telescopes in Hawaii and Chile, and the Keck telescopes, also in Hawaii, to take infrared images of three giant planets that they claim are orbiting a star about 130 light-years away in the Pegasus constellation (Science Express 10.1126/science.1166585).

These two papers are quite important because they show how far we have come developing the techniques for direct imaging Andreas Quirrenbach, University of Heidelberg

Meanwhile, a team led by Paul Kalas of the University of California has used a camera onboard the Hubble telescope to image a giant planet that appears to be orbiting Fomalhaut, a bright star that lies about 25 light-years away in the Piscis Austrinus constellation (Science Express 10.1126/science.1166609). The planet imaged by Kalas’s team is also the first giant planet to be observed over visible-light wavelengths since Neptune in 1846 — a particular boon for astronomers as this faint part of the spectrum is where they hope to see evidence for life-supporting atmospheres.

Indeed, it is because of the potential for observing atmospheric spectra that direct imaging is often referred to as the “holy grail” of searches for planets outside our Solar System. “Imaging discoveries like this are important because they give us the best glimpses into the planets’ luminosities, temperatures and characteristics,” says Joseph Carson, an astronomer at the Max–Plank Institute for Astronomy in Germany.

Astronomers first began detecting extra-solar planets or “exoplanets” in the late 1980s, and since then have found more than 300. The majority of these discoveries have resulted from two methods: either looking for a star’s “wobble” caused by the gravity of a planet as it orbits; or looking for the dimming of a star as a closely orbiting planet moves in front and blocks the star’s rays.

Both of these methods can reveal the orbits and masses of the exoplanets, and the latter “transiting” method can also imply other properties, such as radii and atmospheric composition. But to get good view of the atmosphere of exoplanets orbiting at a reasonable distance — that is, where criteria for habitable conditions are likely to be met — a direct image is essential.

Unfortunately, direct imaging is not easy. Ground-based telescopes suffer from distorting turbulence in the Earth’s atmosphere, and often exoplanets will be hidden in the glare of their parent star. Although astronomers have laid claim to the first direct images of exoplanets before — most recently in September — others have questioned whether these planets are really orbiting, or in fact whether they are planets at all.

To get around the problems of direct imaging, Marois’s team has made use of the wide, 8–10 m apertures on Gemini and Keck together with “adaptive optics” which help cancel out atmospheric distortion to get their images of a trio of exoplanets. Kalas’s team has used a device onboard Hubble known as a coronagraph, which artificially eclipses the parent star to make the glow of their orbiting exoplanet more distinct.

The fact that Marois’s team has imaged three exoplanets around one star will reassure astronomers that there are other systems like ours with many orbiting bodies. On the other hand, both parent stars are much more massive than our Sun, and this feature will add to the growing body of evidence suggesting that it tends to be larger stars that harbour the bigger planets.

However, Andreas Quirrenbach, an astronomer at the University of Heidelberg in Germany and a member of the Exoplanet Task Force set up by NASA and the US National Science Foundation, cautions it is “a matter of debate” whether the two teams’ observations mark the first “unambiguous” direct images of exoplanets, because their mass may be too large. Although all four of the new exoplanets are thought to be well below the threshold of 13 times the mass of Jupiter, which is when a planet technically becomes a brown dwarf, the teams’ estimates rely on models of planetary evolution that are subject to sizeable uncertainties.

Still, Quirrenbach agrees that the observations are the most “bona fide” direct images to date. “These two papers are quite important because they show how far we have come developing the techniques for direct imaging,” he says.