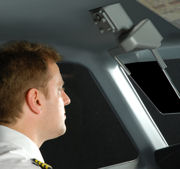 A new head-up display (HUD) developed by BAE Systems uses holographic waveguides to effectively generate the symbology within a display glass in the pilot's field of view, rather than project the data onto its surface. The result is a system that is said to be 50% smaller and lighter than current HUDs. As well as eliminating the need for complex projection optics, it also allows the pilot greater freedom for head movements.

"Our technology is radical and disruptive, and eliminates the normal projection unit altogether," Paul Childs, business development manager for the new Q-HUD display, told optics.org. "It means we can start to get this technology into platforms and envelopes that were previously not accessible."

With a conventional projection HUD, the image from the display glass is focused towards the so-called head motion box, the 3D area that the pilot must keep his head inside to see the whole of the display. "In Q-HUD, the light is emitted from the display glass perpendicular to the surface, and the symbology can be seen on the glass surface from anywhere, even off to the side by perhaps 15°," said chief engineer Malcolm Homan. "The pilot can move his head to the left and right, or up and down. He can also move forward and back, which is in itself a significant advantage of Q-HUD."

Although the Q-HUD system employs unique technologies both in the way the image is generated and the way that the image is placed into a viewable form, it uses standard glass rather than more expensive high-refractive index materials. Similarly, the laser source is a standard source, although one carefully engineered for this application. 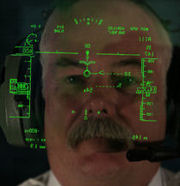 "We have packaged the laser in a very small volume with extremely high efficiency, which is the key to using it in a HUD where the available volume for the equipment is very restricted," said Homan. "We also had to ensure that it will operate in the environments seen in a commercial aircraft, which are more demanding than the passengers in the cabin might think."

Sat in the lining between the aircraft skin and the cockpit interior, the HUD can experience temperatures ranging from -20 to 40°C. "Typically lasers do not like operating over those temperature ranges," noted Homan. "Sources also don't like being linearly controlled over large dimming ranges, which is something we have also achieved with this product. Lasers are usually more comfortable being fully on or fully off, not linearly controlled over a 10,000 to 1 range."

Q-HUD is described as a development of Q-Sight, a family of helmet-mounted display products which also employ holographic waveguides to display information. "This is a development of that waveguide technology into a larger format," Homan said. "There are some optical differences between the two products, but fundamentally it is the same technology." In addition, while Q-Sight was developed for the military market, Q-HUD is specifically intended for commercial aircraft.