A liquid lens that provides instant focusing could bring high quality imaging to hand held devices such as mobile phones. 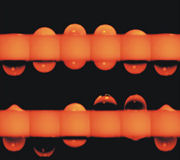 US researchers have found a way to control the focal length of a liquid lens using sound for the first time. The lens is said to require considerably less energy to operate compared with competing technologies and is particularly useful in applications where fast focal length changes are required (Nature Photonics doi:10.1038).

"This liquid lens has the ability to rapidly scan a range of focal lengths and allows sharp images to be captured at high frequency," Amir Hirsa, a professor at the Rensselaer Polytechnic Institute, told optics.org. "The actuation of this lens is relatively simple, requiring only a small pressure variation which can be obtained with sound from a small speaker."

Liquid lenses are attractive for use in compact consumer products such as mobile phones and webcams thanks to their capacity to be miniaturized. Until now, changing the shape and consequently the focal length of these lenses required approaches such as varying an applied voltage across the lens.

In the Rensselaer setup, a 1.68 mm diameter cylindrical hole is drilled into a 1.82 mm thick hydrophobic Teflon plate. On one side of the Teflon plate is a chamber connected to a speaker that produces a sinusoidal driving pressure. The liquid lens is constructed by over-filling the hole with water so that a droplet protrudes from each end. By pinning the droplets at the edges, the opposing curvatures create a spring-like force that makes the system a natural oscillator.

"Due to the length and time scales in which we operate, the effects of viscosity and gravity are minimal, thus inertia is balanced against surface tension and the oscillations can occur with very little energy input," explained Hirsa.

The key to the design is that the water stays in constant, unchanging contact with the Teflon surface, which means that little energy is required to overcome the significant frictional forces.

"Varying the external pressure field causes the liquid to move from one meniscus to the other, similar to a spring mass system, where surface tension provides the force of the spring as the liquid mass position shifts from one meniscus to the other," explained Hirsa. "For a wide range of conditions we find essentially spherical-cap shapes, making the system suitable for optics."

The team is now studying various means of driving the liquid lenses. "The first step to implementation is having a sealed system so that the gas-side is saturated and evaporation is stopped," concluded Hirsa.