A €1bn project designed to show that laser-driven fusion can provide the world with energy in the future took its first steps this week. 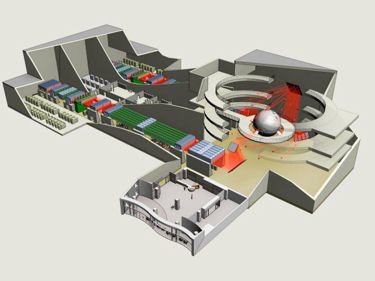 Physicists and politicians from across Europe and beyond gathered at London's Science Museum on Monday to mark the beginning of a three-year "preparatory phase" of a new €1bn project known as the European High Power Laser Energy Research Facility (HiPER). So why do we need another fusion energy project? physicsworld.com looks for the answers.

HiPER is designed to show that laser-driven fusion can provide the world with energy in the future. The idea is to direct a series of extremely powerful laser beams onto a small capsule of deuterium-tritium fuel, heating up the outer surface of the capsule and forcing it to expand outwards, which, by Newton's third law, causes the centre of the capsule to implode.

Another ultra high-power laser heats this high-density core to around one hundred million degrees Kelvin. This energizes the deuterium and tritium nuclei sufficiently so that they overcome their mutual repulsion and fuse, releasing excess energy in the form of neutrons, which can be used to produce electricity.

ITER will cost a fortune, why should we spend even more money on fusion?

The approach adopted by the €10bn-plus International Thermonuclear Experimental Reactor (ITER), currently under construction in the south of France, is to contain the fuel at relatively low densities for several minutes at a time using magnetic fields. 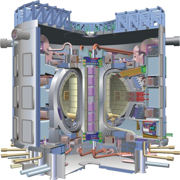 ITER on the inside

Despite its huge price tag, however, no one can be sure that it will generate a significant gain in energy, or at least do so economically. Physicists therefore believe it also makes sense to investigate "inertial-confinement" fusion, which involves holding the fuel at extremely high pressures for very brief periods using lasers or ion beams.

They are, but of a different sort. Scientists know that inertial-confinement works, since experiments carried out by the US military in the 1980s showed that the X-ray output from an atomic bomb could ignite little capsules of deuterium-tritium. These bombs use an initial fission explosion to rapidly compress a deuterium-tritium mixture, with shock waves created inside the mixture heating it to the point of ignition. This "central ignition" process is being reproduced in a controlled way at billion-dollar facilities — the National Ignition Facility (NIF) at the Lawrence Livermore Laboratory in the US and the Mégajoule laboratory in France — where a single set of lasers both compresses and heats the fuel. HiPER, on the other hand, will use a separate laser pulse to do the heating, a process known as "fast ignition" because the second laser must heat the fuel within 10-11s of the implosion.

What are the advantages of fast ignition?

It is more efficient than central ignition. Setting up shock waves requires the fuel to be compressed to enormous densities, which needs very high laser energy per unit mass of fuel. Since fast ignition requires only intermediate densities, it can in principle be used to ignite a larger mass of fuel for a given input energy. And more mass equals more output energy, which means higher efficiencies. In fact, proponents of fast ignition reckon that it is some two to three times more efficient than central ignition. In addition, fast ignition does not require the same degree of precision in the uniformity of the compressing laser pulses and the shape of the fuel pellet.

Do we know if fast ignition works?

There lies the rub. In 2001 Ryosuke Kodama and colleagues at Osaka University in Japan, along with physicists from the UK, used compression and heating lasers to generate fusion neutrons from a fuel pellet. But to demonstrate that the technique can be used as an energy source, physicists will have to prove it can cause ignition.

This may be possible with a higher-energy laser system being put in place at Osaka or possibly on similar facilities starting up at the University of Rochester in the US and at a French Atomic Energy Commission site near Bordeaux. However, it would be more likely to occur at the much higher-energy NIF, if, as has been suggested, the American facility is refitted so that it can carry out fast ignition experiments.

Achieving fast ignition will require a much better understanding of how energy is transferred from the heating pulse to the fuel, whether through relativistic electrons or protons. "We haven't yet convinced ourselves that fast ignition works," says Mike Dunne, a physicist at the Rutherford-Appleton Laboratory in Oxfordshire and head of the HiPER project. "But if it does it would undoubtedly be more attractive to use than central ignition."

So where does HiPER fit in?

HiPER is being designed to show that fast ignition, once proven in principle, can then be used as an energy source. This means demonstrating that the fusion process can be repeated at high frequencies. Inertial confinement is a pulsed technique — similar in principle to the repeated cycles of chemical combustion in the engine of a car — and at NIF the laser system fires every two to four hours, whereas a commercial power plant would need to fire about five times a second to provide the 2 gigawatts typical of a large power station. HiPER will trial the fully-robotic process needed to achieve such a frequency.

The six countries that have officially backed HiPER - the UK, France, Spain, the Czech Republic, Italy and Greece - marked the formal start of a three-year "preparatory phase" for the project on Monday. This phase, which will involve detailed studies of short-pulsed lasers and fuel pellets, as well as decisions on costs, location etc., is being funded with €13m of cash and €50m of work in kind.

Some two to three years down the line another €100m will be needed to develop prototypes, and a few years after that the remainder of the roughly ?1bn construction costs will be needed to actually build the thing. Operating costs over the facility's roughly 20-year life time will also be about €1bn. If all goes well, the facility should start up by around the end of the next decade. As to where it will be built, this depends ultimately on who is prepared to commit the cash, but the UK, which is coordinating the project, is certainly in the running.

The billion-dollar question. The quest to derive energy from nuclear fusion has been plagued by wildly optimistic expectations in the past, and critics have quipped that fusion is always 40 years from commercialization. Fusion advocates, however, are confident that it could happen by about 2050. Indeed, Dunne thinks this estimates holds good for both magnetic and inertial confinement. He concedes that magnetic fusion is "a generation ahead" of its laser equivalent, but believes that fast ignition could potentially close the gap quickly.

David Meyerhofer of Rochester University believes that fusion reactors could ultimately replace all large power plants and be used to extract hydrogen from water for transport. "Thus," he says "it is possible that fusion could eventually produce more than 50% of the world's energy needs." However, he adds that this estimate is "very speculative".