Airy light is being used to move particles and cells for the first time thanks to its propensity to follow a curved trajectory. 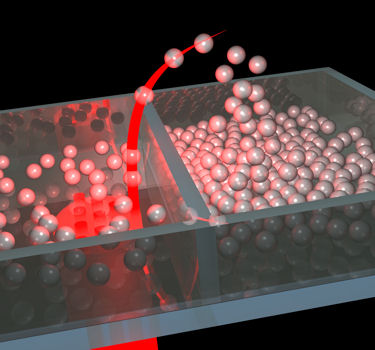 The Airy beam conveys particles from one compartment to another

UK researchers have found a way to transport particles using Airy light for the first time. The group from the University of St Andrews used the unusual properties of Airy light to move particles along a curved path, which could benefit microfluidic and cell biology applications (Nature Photonics doi: 10.1038).

Light conventionally follows a straight path and diffracts as it travels. Airy light on the other hand is non-diffracting and follows a curved trajectory. These remarkable properties make Airy beams well suited for use in particle manipulation as they remove the need for microfluidic flows or additional complex beam shaping.

"Airy beams have unique features that may be exploited for new methods in optical micromanipulation," Kishan Dholakia, a researcher at St Andrews' School of Physics and Astronomy, told optics.org. "They offer a passive approach to clearing particles and cells from a sample chamber as well as allowing particles to precisely follow parabolic trajectories." 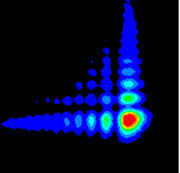 An Airy beam consists of a main spot and a number of side lobes whose intensity decreases with increasing distance from the central maximum. Particles are dragged into the main spot through optical gradient forces and are subsequently guided along its parabolic trajectory.

In the setup, the Airy beam was fired through a sample chamber measuring 1 cm in width and 100 µm in depth. The chamber contained an aqueous suspension of 1.5 µm diameter glass spheres with a density of 1.5 g/cm3.

"The Airy beam does not spread out for a propagation distance of around 75 µm and thus strongly confines the particles in the main spot," explained Dholakia. "After around 75 µm, the beam starts to diffract, which leads to a significant reduction of the gradient force. As a consequence, particles drop out of the main spot and sediment back to the sample bottom, with a lateral deflection of typically 20 µm."

Dholakia explained that the Airy beam was generated using a spatial light modulator (SLM), which imposed a cubic phase modulation on a 514 nm laser source. "The curvature of the Airy beam could be varied using the SLM and we found that we could move the glass particles over a vertical distance of 50-500 µm and a lateral distance of 10-30 µm," he added.

The group is now hoping to explore the potential of Airy beams in sorting, mixing and cell extraction applications.