optics.org speaks to the developers of the first solar simulator for concentrator photovoltaic systems. 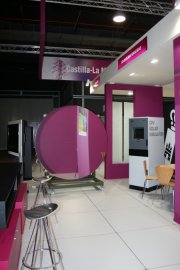 Researchers in Spain have published details of what they say is the first solar simulator for concentrator photovoltaic systems (CPVs). The simulator characterises CPV modules indoors as they come off the production line and is now commercially available through Spanish company Advanced Soldering (Optics Express 16 14894).

"Measurements under real sun have no practical use in a production line because of weather variability and high time consumption whereas an indoor solar simulator allows fast and cost-effective factory testing," Cesar Dominguez of the Solar Energy Institute at the Polytechnical University of Madrid told optics.org. "Around 30 companies are now developing CPV systems and all of them need a characterization tool for research feedback or rating and qualification at the production line."

A CPV system consists of an optical assembly that concentrates solar radiation onto a small photovoltaic element. Using highly efficient III-V semiconductor solar cells can lead to a significant cost reduction so research into CPVs has been intensive as teams try to develop a cost-effective alternative to conventional photovoltaics. 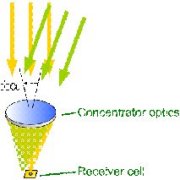 Rating every module that is manufactured is standard procedure in the PV industry. The objective for Dominguez and colleagues was to find a way to use artificial light to predict and compare the real sun behaviour of CPV systems, rating their performance at standard conditions. This is easier said than done, as concentrator optics have a limited acceptance angle.

"Only the light rays impinging the optics within a small angle can reach the solar cell and the bigger the concentration, the smaller the acceptance angle," commented Dominguez. "High concentration leads to a narrow acceptance angle of around 1 degree so only well aimed light reaches the cell. The light source in a CPV solar simulator has to be optically adapted to convert its divergent beam into a collimated one." 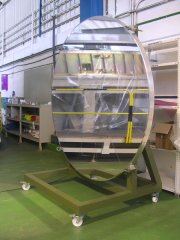 The solution was to use a xenon flash lamp, which simulates natural sunlight, in tandem with a parabolic mirror. "The challenge was to produce a collimator mirror with long focal length and large area at a moderately low cost but producing very good collimation and spatial uniformity," said Dominguez. After much investigation, the end result was a mirror with a diameter of 2 meters and a focal length of 6 meters that uses an aluminium-based reflective coating. 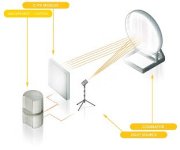 CPV solar simulator - how it works

According to Dominguez, the resulting simulator is based on a multi-flash testing system with the whole process being controlled by a PC. The xenon flash lamp is triggered and then biased at different voltages, where a higher triggering voltage corresponds to a higher peak power. The time between flashes is typically 4 seconds and the system records several different pairs of current-voltage points before constructing an I-V curve.

"The measurement can be made in 30 seconds, and two measurements can be made simultaneously if the module size fits in a half of the collimator mirror area," said Dominguez.