Optofluidic microscope shrinks to fit on a chip

An inexpensive and high-resolution microscope has for the first time been engineered to fit onto a single chip. Marie Freebody speaks to Changhuei Yang of Caltech, US, to find out how the device could benefit applications where portability and low cost are essential.

Scientists in Switzerland and the US have built the first on-chip microscope, which they claim will provide clinicians with a rugged and high-resolution instrument that can be carried around in a pocket. The system disposes of bulky lenses in favour of a CMOS sensor combined with a microfluidic channel for a highly compact design (Proceeding of the National Academy of Sciences 105 10670). 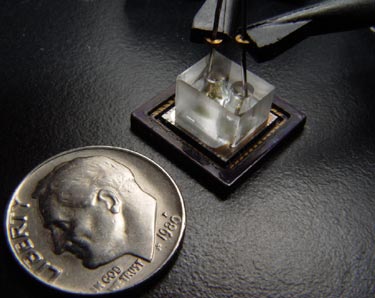 "Our device combines the ability of microfluidics to easily transport cells in suspension, with the ability of optics to perform sensitive detection," Changhuei Yang, assistant professor at the California Institute of Technology, US, told OLE. "So far, we have demonstrated a resolution of 800 nm, but we believe that this could be further improved to around 50 nm."

A solution for the third world
The performance of the device is comparable to a 20x microscope, but in terms of size, cost and ability to mass produce, the device has significant advantages.