Terahertz radiation holds great promise for enhanced security systems, industrial inspection and sophisticated spectroscopy. Marie Freebody speaks to Hartmut Roskos to find out about the progress that has been made so far and the key challenges that remain. 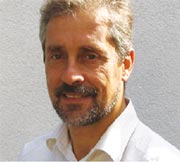 Hartmut Roskos is professor of physics at Johann Wolfgang Goethe-University, Germany. Earlier this year, OC Oerlikon awarded his research group a five-year endowed Associate Professorship for Terahertz Photonics. The group's recent achievements include the development of terahertz emission diagnostics for the carrier envelope phase of few-cycle light pulses, the realization of very fast 3D terahertz scanners, and the development of multi-pixel terahertz detectors based entirely on silicon CMOS transistor technology.

Can you summarize how terahertz radiation is produced?
Terahertz radiation spans 100 GHz to 10 THz, which lies between the traditional realm of electronics on the low-frequency side and that of infrared optics on the high-frequency side. This means that there are both electronic and optoelectronic approaches to generating terahertz radiation. The electronic approach uses semiconductor or vacuum electronic devices such as oscillators and multipliers, while optical methods employ photomixers and lasers. All these approaches suffer from limited output power: electronic devices must generally be small, and with terahertz lasers, it is difficult to achieve the required population inversion. A way out of the power problem is to employ powerful large-scale generators such as free-electron lasers and synchrotrons.

Why is terahertz radiation an important area of research?
Terahertz continues to be important for spectroscopy applications in fundamental materials research, astrophysics and so on, and is becoming valuable for the contactless identification of substances. A key feature of terahertz radiation is that it can penetrate a number of materials such as cardboard, paper, clothes, many plastics and some types of glass. This allows us to look through covers and into boxes, packages and luggage, which is useful for security purposes and for quality control. Terahertz radiation can be measured such that the electric field radiation and phase is detected, which is useful for depth profilometry and the generation of 3D images. With information technology gradually expanding to ever higher frequencies, the time will come when terahertz frequencies will be interesting for data communication and processing.