Photonics21 is a voluntary association of photonics professionals that has grown rapidly from a handful of participants to over 1000 members. Marie Freebody finds out more from the president of Photonics21 and CEO of OSRAM Opto Semiconductors, Martin Goetzeler. 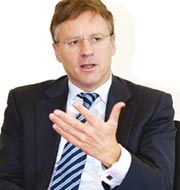 Photonics21 is an initiative that was founded in December 2005, with the strong backing of European Commissioner Viviane Reding. The organization is a so-called European Technology Platform, which aims to bring together European photonics professionals from academia, industry and politics in order to establish a research and development strategy. Today, Photonics21 has more than 1000 members, half of which are from industry (of which 75% are SMEs) and the other half are from academic institutions.

Why was a European platform such as Photonics21 needed?
We expect the 21st century to become the century of photonics, which means that it is very important to bring the photonics community together. Until Photonics21, there was no platform combining all photonics companies throughout Europe.

Our most important task is a continuous knowledge transfer between all members and to agree on a research agenda. We align the common efforts of academia and industry to drive new applications and work as an advisory body to the EC to prioritize photonics research activities.

Photonics is such a broad field, ranging from lighting, manufacturing, medical, optics and security, and we have many leaders in these areas here in Europe. In a photonics study, which we carried out at the end of 2007 (see box), we showed that the photonics market was valued at €230 bn in 2005. Of this, Europe makes up close to 20%, with particular strengths in areas such as lighting, medical technology and manufacturing. There is a great need to bundle this European know-how in order to remain a strong competitor and move ahead of other regions. This is something that Photonics21 supports and drives.