This month's topic is the promising field of plasmonics. Marie Freebody speaks to Niek van Hulst about the potential wealth of applications that are on the horizon. 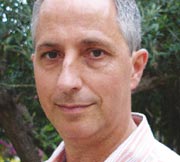 Niek van Hulst heads up the Molecular Nano-Photonics group at the Institute of Photonic Sciences (ICFO) in Barcelona, Spain. His current research projects include optical field enhancement and probing light propagation on the nanoscale, using molecules and antennas as local probes. His work on nanoantennas has brought to light the interaction between plasmonic antennas and single molecules, where antenna-controlled emission could lead to simpler more-efficient biosensing systems.

Can you summarize what the field of plasmonics encompasses?
Plasmonics is the science, technology and application of plasmons, which are the collective oscillations of a free electron gas (plasma). Plasmons are mainly found in metals and often at optical frequencies. Fundamentally, a plasmon is a quasiparticle, a quantum of a plasma oscillation, as much as a photon is a quantization of light. In practice, the connection to classical plasma oscillations allows us to describe most of the properties of plasmons directly by Maxwell's Equations. The coupling between photons and plasmons is particularly interesting. The resulting particle is called a plasma polariton, which can propagate along the surface of a metal until it decays by absorption or radiatively into a photon. These surface plasma polaritons, or surface plasmons, allow light energy to be carried along a surface in the form of collective electron motions.

Why is plasmonics an important area of research?
Plasmons carry light energy as a package of electron oscillations. This means that their behaviour deviates from the normal rules associated with photons. Plasmonic structures can exert huge control over electromagnetic waves at the nanoscale. The peculiar dispersion of plasmons enables excitation of modes with very large wavevectors in only a narrow frequency range. As a result, energy carried by plasmons allows for light localization in ultrasmall volumes, far beyond the diffraction limit of light. At the same time, the very flat dispersion allows for extremely slow light when relying on plasmon propagation. The localized nanoscale fields come together with large field enhancements, which is a major advantage for sensing, imaging and spectroscopy applications.

What are the key challenges left to overcome in this field?
Plasmonic resonances depend on the type, shape and size of the material on the nanometre level for optical frequencies. The plasmonic properties suffer appreciably from intrinsic losses of metals, which is the main limitation. This means that reproducible nanofabrication techniques, crystalline materials and inexpensive replication are all key issues.

What do you think the next big breakthrough will be?
We may soon witness interesting scientific progress in plasmonic lasers and plasmon-assisted quantum optics. In the long-term we will see wider applications thanks to nanocircuitry, energy harvesting, nanoscale imaging and sensing.

• This article originally appeared in the September 2008 issue of Optics & Laser Europe magazine.