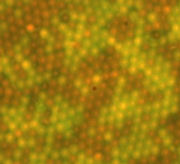 Anthony Choi and his team at the University of Hong Kong has developed a smart coating of green and orange-red fluorescent nanospheres, which emits white light when applied to blue (470 nm) LEDs. The dye-loaded polystyrene particles self-assemble into an opal-like photonic structure that helps to channel more light out of the solid-state devices and provides a smooth emission profile (Nanotechnology 19 355203).

Typically, chip makers obtain white light by coating blue LEDs with a phosphor layer or by optically mixing red (R), green (G) and blue (B) emitters. The RGB approach is more efficient in terms of light output, but combining the light in the right proportions to avoid colour separation can present a challenge. Conversely, the phosphorous coating is much easier to use, but gives a reduced light output due to the energy losses incurred during spectral down conversion.

Choi's technique can be thought of as an enhanced version of the phosphor approach. The method suffers from the same Stokes shift loss, but offers highly uniform white-light emission as demonstrated by the group's prototype devices. 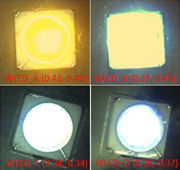 "A wide range of dyes are available, which allows for precise colour tuning and offers different shades of white and higher CRI values," Choi told nanotechweb.org. "The dyes are entrapped within the nanosphere, which minimizes the risk of photobleaching."

The lifetime of the coating is predicted to exceed 36 months and the group has obtained luminous efficacies as high as 67.2 lm W–1 with colour temperatures ranging from 3587 to 13,000 K.

To prepare their devices, the researchers apply coatings containing mixtures of green and orange-red nanospheres onto GaN microLEDs to generate polychromatic white light. The particles self-assemble into a hexagonally close-packed structure that gives a large surface area for absorption and fluorescence, which in turn enables efficient spectral conversion.

"We want to compete in the field of solid-state lighting, but at the same time we are combining this technology with our expertise in fabricating microLED arrays to develop functional devices including colour-tunable LEDs and full-colour microdisplays," said Choi. "From a business point of view, another benefit of our approach is that it overcomes the restrictions associated with existing IP concerning the use of commercial phosphors."