US researchers have unveiled two different approaches to 3D cloaking that they say is a significant step towards fabricating practical cloaking devices.

Two separate groups of scientists from the University of California have built the first three dimensional optical metamaterials that exhibits negative refraction. Operating at infrared and visible wavelengths respectively, the metamaterials could pave the way to real life applications (Nature 429 538) (Science 321 930).

In the Nature paper, the Berkeley researchers created a three-dimensional prism made from a "fishnet" structure. The material consists of 21 alternating layers of silver and magnesium fluoride into which a grid "fishnet" with periodicity smaller than the wavelength of light is etched.

"The goal of this research was to build on existing work in the field in which 2D metamaterials have been created," Jason Valentine, a graduate student at the University of California, told optics.org. "We were able to take the next step towards practical cloaking by constructing three-dimensional metamaterials exhibiting negative refraction."

According to Valentine, the key to the approach is the nano-structuring of the multilayer film, which leads to optical magnetism or permeability. "For light ranging from 1200-1700 nm, both the permittivity and permeability are negative, leading to a negative index of refraction," he explained. "This leads to negative phase propagation in the material and negative refraction at the interface."

Previous work with metamaterials at optical wavelengths involve using materials that are thin compared with the wavelength of light, such as the work of US researcher Christopher Davis from the University of Maryland, reported last month on optics.org . These two dimensional materials suffer from a large amount of loss and cannot be used in device applications.

"Reducing loss in metamaterials has been a challenge in the field since its inception and is a key issue for real world applications and devices," commented Valentine. "In the work published in Nature, we were able to construct low-loss three-dimensional metamaterials and we found that making the material thicker actually reduces the intrinsic loss." 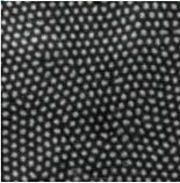 In the work published in Science, a different group of scientists in the same laboratory built an array of nanowires, which change the electric field of passing light waves. The team grew silver nanowires inside porous aluminium oxide at tiny distances apart, again, smaller than the wavelength of light. This structure was able to bend red light at wavelengths of 680 and 780 nm respectively.

According to Valentine, while the two materials developed by the groups do not exhibit cloaking ability in their present form, it is a step in the right direction. "The material properties would first need slight engineering before it could be wrapped around an object to cloak it," he added.

Before the materials can be used in commercial applications, the technical challenge of fabricating these structures on a large scale, must be overcome. "The next step is to realize an application, such as high resolution imaging in which materials exhibiting negative refraction can be used to image objects below the diffraction limit," concluded Valentine.