Researchers in Germany have engineered a fibre laser system with a high repetition rate that is allowing them to drill holes in metal faster than ever before. 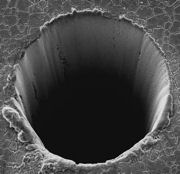 "Both heat accumulation and particle shielding are investigated for the first time at high repetition rates," Antonio Ancona, a visiting scientist at the Friedrich-Schiller University in Jena, told optics.org. "We have found that our fibre CPA system decreases the process time, but still produces a high-quality hole, which is important for industrial applications."

The precision, quality and reliability of holes produced using laser systems that deliver pulses of around 1 ns or longer is limited. This is because the ablation of metals is often accompanied by the formation of large heat-affected zones and a throw-out of the molten material.

Although femtosecond lasers offer improved performance, one of the main drawbacks is a low processing speed, which results from the lower repetition rate of these sources. On the other hand, at high repetition rates, heat accumulation effects might lead to melting and increased heat-affected zones. A further restriction on the highest useful repetition rate could be the interaction of the generated plasma or ablated particles with subsequent laser pulses as this will distort or shield the laser radiation. 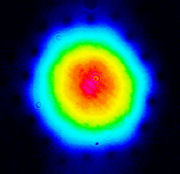 The group's approach was to develop a CPA fibre laser system and investigate the effects of particle shielding and heat accumulation on the process time and hole quality for repetition rates ranging from 50–975 kHz. The 1030 nm source emit 800 fs pulses with energies ranging from 10–70 µJ and a corresponding average power of up to 68 W. The laser unit consists of a passively modelocked Yb:KGW oscillator, a dielectric grating stretcher-compressor unit, an acousto-optic modulator for pulse selection and two ytterbium-doped photonic crystal fibres, both in single-pass configuration, as amplification stages.

Two drilling techniques were studied: percussion – in which consecutive pulses are superimposed at the same focal spot, and trepanning – which involves moving the laser beam on a circular path relative to the target. The researchers found that the percussion approach offers faster drilling, but laser trepanning produces higher quality holes. "However, we found that working at such high repetition rates and pulse energies allows us to considerably reduce the processing time even when using the laser trepanning technique," commented Ancona.

The next steps for the Jena group are to investigate the influence of pulse duration from femtoseconds to tens of picoseconds in laser ablation processes at high average power and high repetition rates. "We are developing new processing strategies using the CPA laser system to further improve the processing speed and produce the highest quality holes," concluded Ancona. "We will also be scaling the output laser parameters to higher powers."

Antonio Ancona holds a permanent position at the CNR-INFM Regional Laboratory "LIT3" of Bari, Italy. The CNR-INFM of Bari is supported by the Italian Ministry of Research and University (MIUR) under the project 297 "FIBLAS". The University of Jena was supported by the German Federal Ministry of Education and Research (BMBF) under the PROMPTUS project.