A new system to generate coherent extreme-ultraviolet light could be used as a tabletop source say researchers in Korea. 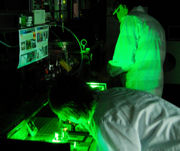 The device, based on bow-tie shaped gold "antennas" on a sapphire substrate, is smaller and cheaper than existing systems and might allow a laptop-sized extreme-ultraviolet (EUV) source to be constructed directly from a single femtosecond light pulse. Applications include high-resolution biological imaging, advanced lithography of nanoscale patterns and perhaps "X-ray clocks".

EUV radiation is difficult to produce using current methods, which rely on using amplified light pulses from an oscillator to ionize noble gas atoms. The electrons freed during this process are accelerated in the light field and their surplus energy is freed as attosecond (10–18 s) pulses of light of different wavelengths. The shortest wavelengths of light can then be "filtered out" to produce a single EUV pulse.

Scientists would ideally like to produce EUV light directly from the oscillator without the need for expensive and bulky amplifiers. In this way, EUV-light generation could be simplified and the size of the source significantly reduced to tabletop dimensions. In contrast, current devices usually measure around 2–3 m across. Now, Seung-Woo Kim of KAIST in Daejeon and colleagues have shown that this might be possible.

The researchers say that a bow-tie nanostructure of gold – measuring around 20 nm across – can enhance the intensity of femtosecond laser light pulses by two orders of magnitude. This is high enough to generate EUV light with a wavelength of less than 50 nm directly from a small pulse with an energy of 1011 W/cm2 injected into argon gas (Nature 453 757). The energy needed is about 100 times less than in traditional approaches.

How the technique works


The technique works thanks to resonant plasmon field enhancement, which is sensitive enough to detect individual molecules on a metal surface. When surface plasmons in the gap of the bow-tie gold nanostructures (see figure) are illuminated with the correct frequency of laser light, they resonate in unison, greatly increasing the local light field intensity.

Immediate applications include high-resolution imaging of biological objects, advanced lithography of nanoscale patterns and making X-ray clocks. These exploit a frequency-stabilized femtosecond laser and are being investigated worldwide to replace the current caesium atomic clocks for better time precision. 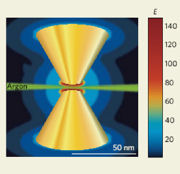 "This new method of short-wavelength light generation will open doors in imaging, lithography and spectroscopy on the nanoscale," commented Mark Stockman of the Georgia State University in a related Nature article (Nature 453 731). The spatially coherent, laser-like light could have applications in many areas: spectroscopy; screening for defects in materials; and, if extended to X-ray or gamma-wavelengths, detecting minute amounts of fissile materials for public security and defence.

The Korea researchers now plan to improve the conversion efficiency of the generated light by modifying the design of their nanostructure – for example, by making 3D cones with sharper tips. These will not only enable higher local field enhancement but also better interaction of the femtosecond light pulses with injected gas atoms. The team will also test the spatial and temporal coherence of the generated EUV light.