US researchers have unveiled a new optical frequency comb that could help astronomers to identify distant Earth-sized planets. 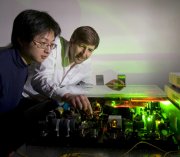 Scientists at Harvard University and the Massachusetts Institute of Technology have shown that a modified laser frequency comb is able to achieve high-precision calibration of the light emitted by distant stars. By increasing the resolution of astronomical measurements, the researchers believe that the "astro-comb" could for the first time allow planets the size of Earth to be detected in other solar systems.

Astronomers searching for planets outside of our solar system must usually rely on indirect methods that monitor the effect of the planet on an object that is easier to observe, such as the parent star. One common technique measures the star's "wobble" caused by the planet's gravitational pull, while another measures the dimming of a star's light as a planet passes in front of it.

Both of these techniques can identify relatively large planets, but their resolution is limited – and they can't yet reveal the small, rocky planets that astronomers believe are more likely to support life. But the Harvard team claims that its astro-comb could yield a 100-fold improvement in the resolution of the "wobble" technique, which would allow detection of a planet the size of Earth.

"The ultimate goal will be to find planets of Earth mass with a one-year period around a Sun-like star," said Harvard's Ronald Walsworth.

The purpose of the astro-comb is to provide a precise frequency standard against which spectral measurements can be calibrated. The "wobble" method works by measuring measure small shifts in the wavelength of light emitted by the parent star. These spectral shifts can in turn be related to changes in the star's radial velocity that are caused by the planet's gravitational pull.

But these effects are extremely small. Even Jupiter, the largest planet in our solar system, alters the Sun's radial velocity by 13 m/s in a cycle that takes 12 years. The Earth, in contrast, changes the Sun's velocity by just 10 cm/s over the course of a year. "Improved sensitivity is required to find lighter planets like Earth analogues, because lighter planets pull less strongly on stars," said Harvard researcher Chih-Hao Li.

Planet hunters therefore need to detect tiny shifts in the star's spectral lines that might occur over months and even years. Essential to the job are highly stable wavelength calibrators that prevent measurement drift from affecting the performance of astronomical spectrographs. Existing reference standards based on discharge lamps and absorption spectra allow changes in radial velocity of down to 1 m/s to be measured, but the astro-comb could increase that resolution to 1 cm/s.

Researchers make coarse-toothed comb
Astronomers have long been interested in using optical combs as a frequency standard. Such laser combs based on optical combs exploit pulsed lasers to produce regular spikes of light that are evenly spaced in wavelength, and are well known for their long-term stability and high spectral resolution. But they have not previously been used in astrophysics because the fringes of light in a normal optical comb are too close together to measure the light emitted by stars.

Walsworth and colleagues overcame this problem by incorporating a Fabry-Pérot filtering cavity into the design. The result is an optical comb with a line spacing of 40 GHz (about 10 nm), produced from a pulsed Ti:sapphire laser source with a repetition rate of 1 GHz (Nature 452 610–612).

According to the team, the modified design offers the same stability and reproducibility as a normal optical frequency comb. "Now we can tune the system and get out exactly the light that a particular astrophysical spectrograph needs," said Walsworth.

Walsworth's team is now preparing to ship its astro-comb to the Multiple Mirror Telescope in Arizona, where it will be used to calibrate measurements of the light emitted by stars in a nearby globular cluster. It's then planned that the instrument will be installed on a state-of-the-art spectrograph that is being built for the Isaac Newton group of telescopes on the Canary Islands, which is due to be operational in 2010.