Low-cost lasers are being developed for the display market at previously unheard of price/performance ratios. Matthew Brennesholtz of Insight Media looks at the device specifications for various projection applications and the key players in the market.

Most visible light lasers have to date been used for laser light shows, medical, industrial or military applications. The low volumes and relative price insensitivity of these markets has kept the prices of these visible lasers high. To enter the display market, laser developers have been forced to look at new designs with radically different price/performance ratios. Insight Media has evaluated these lasers and forecast their application to mass-market displays through to 2012.

Currently, the only commercially available laser projection systems are expensive and intended for the visualization and simulation markets. Jenoptik and Evans & Sutherland are the two major manufacturers of laser-based projection systems, with Jenoptik targeting primarily the aviation simulator market, and Evans & Sutherland the planetarium market.

Neither company will reveal the price of these laser projectors as they are always sold as part of a system, but they are certainly more than $150,000 (€101,000) each. This compares with perhaps $35,000 for an equivalent non-laser projector targeted at the visualization or simulation market. The main added value that laser projectors bring is extremely high contrast, which is crucial when showing the dark scenes that contain a few high-luminance objects typical of planetarium shows or aviation night-time training. Figure 1 shows an Evans & Sutherland Digistar III laser projector at the centre of a planetarium dome. The high resolution of this projector, 4 × 5 k or about 10 times the pixel count of a normal digital cinema projector, allows a single projector to fill the entire dome.

Lasers and projection displays are a natural combination, as was recognized shortly after the invention of the laser. Figure 2 shows a laser projector developed by Texas Instruments (TI) in 1966. The low étendue of lasers allows the use of very small microdisplays, or no microdisplay at all, which in turn leads to compact optical systems. The Digistar III uses a linear MEMS array and the Jenoptik projector is like the TI projector in that the laser beams are raster scanned and the laser output is modulated to produce the image.

Vital statistics: lumens
The most compact projectors currently under development are pico-projectors. These projectors are typically the size of a mobile phone although some are small enough to be embedded into the phone itself. One would think that pico-projectors would benefit the most from the small form-factor enabled by lasers. But, at the Consumer Electronics Show (CES) in Las Vegas, US, in January, of the 16 pico-projectors I saw, only two used all-laser light sources (Microvision and Scram Technologies) and one used a hybrid laser/LED source (Explay). The others used LED solutions, including both RGB combinations and white LEDs.

Mitsubishi introduced a rear-projection TV (RPTV) using red, green and blue lasers for illumination at CES. This is the first formally announced mass-market projector containing lasers, although Mitsubishi gave neither a specific availability date or a retail price for the system.

A pico-projector producing 10 lm would typically need 60 mW per colour at around 462, 532 and 630 nm for blue, green and red respectively. In comparison, RPTV requires about 3 W per colour. The requirements on the lasers, other than the power output, are in general relaxed compared with current applications for visible lasers. For example, projector makers prefer multimode over singlemode lasers because the reduced coherence leads to reduced speckle at the projection screen.

Vital statistics: cost
Visible lasers of the correct wavelength have had sufficient output power for display applications for many years. The main barrier to the more widespread adoption of lasers in projection systems has been cost. Most of today's commercially available high-power visible lasers are intended for markets that are relatively insensitive to cost such as laser light shows, medical or military. According to the price study in Insight Media's Laser Report, a RPTV based on these lasers would have to be priced at $90,000 or more, and poor sales would be expected.

An extensive study of laser prices was done as part of our laser report and a sample result is shown in figure 3. It shows the unit prices of 63 different commercially available red lasers in the correct wavelength range in 2005 plotted with the prices of 83 commercially available red lasers in 2007. The blue solid line passes through or below prices from 2005 on the assumption that display makers would like the lowest cost laser available, with no special features or packaging. The blue dashed line is drawn at or below the 2007 prices.

An additional problem is that display makers typically want a minimum of 100,000 sets of lasers. If you ask a traditional laser manufacturer to quote for 100 k, 532 nm, 3 W green lasers, you are likely to get a blank stare. Potential electronic cinema volumes are lower, perhaps 5000–15,000 laser sets per year.

In order to forecast prices at these higher volumes, Insight Media has developed a price-volume model that extrapolates from low- to high-volume production. The model is based on the price-volume relationship of various optical and optoelectronic products, including the few lasers where the relationship is known. The 1–100 k high-volume price lines are derived from the unit price line using this model. Even the 100 k prices shown in the figure are too high for display makers: new laser designs are needed to provide a price-performance breakthrough.

Key contenders
Today, multiple companies are developing low-cost lasers specifically for display applications. One of these companies is Novalux, which was acquired recently by Arasor (see OLE February p5). According to Greg Niven at Novalux, this means that the Novalux division of Arasor will focus on developing complete lasers, rather than selling the mounted laser epitaxial components to its licensees. This process will be aided by Arasor's high-volume cleanroom manufacturing facilities in China. 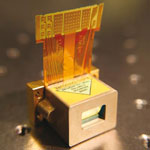 Arasor also recently inked a $300 m joint venture (JV) with ZTE International financed by the China Development Bank to commercialize a range of laser-based display applications including televisions, projectors and mobile phones. Presumably, the lasers produced by the JV will be based on Novalux technology, such as the device shown in figure 4.

While Mitsubishi did not announce the source of its lasers, it is known to have a laser development programme. One can only assume that if all three lasers in the television introduced at CES were built by Mitsubishi, this would have been announced.

QPC is another company targeting lasers at the display market. It recently received a $1.15 m development contract from an unnamed CE company. This becomes a solid $11 m production order once QPC demonstrates that it can meet the specifications.

Another contender in the lasers for projection race is EpiCrystals of Finland. Its initial products are expected to have 60 mW per colour, just right for the pico-projector market. Its roadmap has samples going to strategic customers in 2008 and mass-production in Q1 2009. Lasers up to 500 mW are on the roadmap for Q3 2009 and the company is also planning lasers up to 3 W per colour. All of EpiCrystals' lasers are based on a nonlinear conversion similar to frequency-doubling of infrared wavelengths generated in GaAs, but specific details are not available.

Other companies known to be developing lasers specifically for display applications include Bookham, Corning, Laser Light Engines, LightRush, Osram, Photodigm and Principia Lightworks. We assume that there are other "stealth" companies developing projection lasers that Insight Media has not heard of.

LEDs are currently leading in the race for solid-state light sources for projection, with LED-based pocket projectors and RPTVs both commercially available. In addition, as mentioned above, most developers of first-generation pico-projectors are using LEDs rather than lasers. LED believers claim the following major advantages over lasers for projection displays: availability of red, green, blue and white LEDs; reduced costs; no safety hazards; reduced speckle at the screen; high efficacy of current LEDs; and the potential for LEDs with still higher efficacies. Laser advocates can give convincing counter arguments to all of these points, but only time and the marketplace will determine which technology wins.

The projection market is currently dominated by high-intensity discharge lamps, such as the UHP from Philips Lighting. The lead that LEDs currently have in the projection market could change as the lasers under development come on the market. One reason that LEDs are ahead of lasers is the huge investment in LED research and development for non-display applications. There are many mass-market applications for visible LEDs and the synergy between LEDs for illumination and LEDs for displays is strong.

On the other hand, there are relatively few mass-market applications for visible lasers so the developments have been going slower. As companies like Arasor will testify, there is money available for laser development and Insight Media expects that these lasers will arrive on the market, probably sooner rather than later.

• This article originally appeared in the March 2008 issue of Optics & Laser Europe magazine.