The European market for laser materials processing machines grew more than 20% in 2007, while at the same time the Asian and American markets declined. 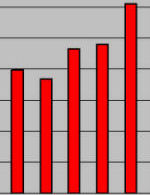 The world market for laser materials processing systems grew by 5% in 2007 to reach a record €6.3 billion ($9.6 billion), although growth rates across the geographic markets and product segments varied considerably. "Europe leads the growth with an increase of more than 20%," Arnold Mayer of Optech Consulting told optics.org. "Germany, which is the largest market for laser machines in Europe by far, added more than 15% of market volume, with Spain and France also showing strong growth."

Less impressive results came from the US and some Asian markets. "Economic uncertainty in the US led to very weak demand," commented Mayer. "The laser materials processing sector is heavily driven by investment, and if development in the general economy becomes flat or negative, even by a relatively small amount, then the decline in investments is much greater. So far the European market is not following suit. The usual assumption is that Europe will be affected immediately by conditions in the US, but in 2007 at least this was not the case."

The market in China continued to surge ahead with a growth rate of 25%, although that was not enough to prevent the overall Asian market from declining slightly. "In China, the sector is actually growing at a lower pace than in previous years, in contrast with the country's continuing dominance in the machine tool market," commented Mayer.

The difference between the two sectors illustrates how China's industrial muscle is usually built on the adoption of high-volume low-tech manufacturing, rather than the embrace of high technology processes, according to Mayer. "Laser materials processing is still new technology, but the potential in China is clearly there. In the longer term China will become a heavyweight player."

The market for laser processing systems can be divided into two sectors: macro and micro. Macro covers cutting, welding, marking and rapid prototyping applications, while micro includes the processing of semiconductors, printed circuit boards and other electronic components.

"In the macro sector, even well-established applications are a long way from saturation," said Mayer. "As a result, the world market for macro processing systems rose by 5% compared to the previous year, reaching €4.9 billion." Certain companies in the macro processing sector are reporting growth well in excess of the overall industry (see IPG strengthens IP protection as sales soar previously on optics.org).

Demand for micro processing systems depends on application, with modest growth in flat-panel display and solar-cell structuring, but a decline in semiconductor processing. Overall, the world market was unchanged at €1.4 billion, although Mayer predicts future growth in the sector as new applications emerge.

"There are laser drilling and direct emission methods coming through in printed circuit board processing, and new approaches to structuring flat-panel displays are being developed. There's also the question of what will come next in microlithography, which could be laser-based processes of various kinds. So there are lots of applications that have growth potential in the micro sector."