An optical tweezer that uses a Fresnel zone plate to trap instead of an objective lens could provide a cheaper and more flexible alternative to conventional optical traps. 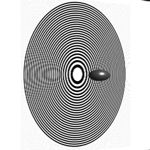 A team from the US has replaced the heart of an optical tweezer – the objective lens – with a microfabricated Fresnel zone plate (FZP) for the first time. Unlike lens-based traps, the FZP design allows the focusing element to be fabricated directly onto the walls of a fluidic chamber, which is useful for lab-on-a-chip applications (Applied Physics Letters 92 071112).

"This is the first time that a FZP has been used as the only focusing element to produce an optical tweezer," Ethan Schonbrun, a researcher at Harvard University, told optics.org. "Our device eliminates the objective lens, which is a large and expensive element, with a zone plate that is so small and thin that it can be put anywhere – producing a trap almost anywhere."

A first for Fresnel zone plates
Optical tweezers use a tightly focused laser beam to trap and move objects with sizes ranging from tens of nanometres to tens of micrometres. While FZPs have previously been used in conjunction with objective lenses to shift the focal spot, they have not been used by themselves as the trapping tool.

The US team found that the performance of its zone plate design is comparable with conventional optical tweezers. "It was our goal not only to demonstrate three dimensional trapping in an integrated system, but also to carefully calibrate the trapping stiffness – determined by bead position as a function of time," commented Schonbrun. "Our aim is to use the new design for similar experiments currently performed by traditional optical tweezers."

Why Fresnel zone plates?
The zone plate produces a focus that is only 8 µm from the lens compared with around 200 µm for an objective. Unlike an objective lens, the FZP can be fabricated directly onto the inside wall of a microfluidic channel so that the position of the trap is not limited by its working distance.

The FZP comprises 50 nm-thick concentric gold rings fabricated on a glass slide and is designed to be used at the glass/water interface of a sample cell. With a focal length of just 8 µm and a diameter of 100 µm, the FZP yields an effective numerical aperture of 1.31. "The gold rings of the zone plate produce a circular diffraction grating that focuses incident light," explained Schonbrun. "The focal length can be adjusted by changing the relative spacing between the gold rings."

Although an objective lens is still used to load the trap with beads and to characterize its performance, it is not required to produce the trap. "The objective lens is used for calibration of the trap stiffness and to load particles into the trap by pushing them towards the centre of the zone plate," explained Schonbrun. "The particles are trapped by the focal spot produced by the zone plate alone."

The next goal for the team is to fabricate arrays of zone plates to trap large numbers of particles. "In this way, different properties of the fluidic channel, such as flow velocity, viscosity and temperature can be spatially mapped by observing the trapped particles," concluded Schonbrun.