Astronomers have for the first time detected the faint starlight reflected from the surface of a planet orbiting another star. 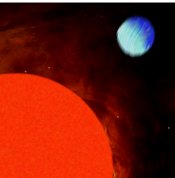 An international team of astronomers has made the first direct measurements of the visible light that is scattered in the atmosphere of an exoplanet. Polarization measurements allowed the scientists to infer the size of the planet's atmosphere, and to trace the orbit of the planet directly – a visualization feat that's not possible with indirect detection methods.

"The polarimetric detection of the reflected light from exoplanets opens new and vast opportunities for exploring physical conditions in their atmospheres," said team leader Svetlana Berdyugina of ETH Zurich's Institute of Astronomy. "In addition, more can be learned about radii and true masses, and thus the densities of non-transiting planets."

Observing exoplanets directly is extremely difficult because the light reflected from the surface of the planet is much fainter than the glare from the parent star. As a result, astronomers searching for planets outside our solar system usually exploit indirect methods that monitor the effect of the planet on an object that is easier to observe, such as the parent star.

Some direct measurements have been made in special circumstances, such as when an exoplanet's orbit takes it behind its parent star – in which case the absence of the planet's reflected light causes the star to "wink". In this case, however, Berdyugina and colleagues exploited the fact that light reflected from the planet is almost always linearly polarized, while the light emitted by the star is unpolarized.

"The maximum polarization is achieved when the reflecting (or scattering) angle is 90°," Berdyugina told optics.org. "In the case of a planet, this happens when the planet is at maximum visual separation from the star." Such events, known as elongations, occur twice during each orbit.

However, extremely accurate measurements of polarization are needed to separate the bright unpolarized light from the faint polarized light. "This has been achieved with our polarimeter," said Berdyugina.

This instrument, developed by team members from the Tuorla Observatory in Finland, is a double-image CCD polarimeter that has been fitted to the 60 cm KVA telescope in La Palma, Spain. The KVA telescope is ideal for polarization measurements, since it has an equatorial mounting that dramatically reduces the polarization introduced by the instrument, and also keeps it constant over long observation periods.

Two other factors were vital for success. First, the polarization was measured in the blue part of the visible spectrum, based on the assumption that Rayleigh scattering is the dominant scattering mechanism at work in the planet's atmosphere. Earlier attempts made measurements at red wavelengths, which resulted in inconclusive results.

Second, the astronomers chose to study a "hot Jupiter" planet – one that orbits extremely closely to its parent star and completes each orbit in just a few days. According to Berdyugina, this means that the "reflecting surface of the planet as visible from the star is larger", which in turn increases the degree of polarization.

The scientists were also able to recover the orientation of the planet's orbit and trace its motion in the sky. Good agreement was found between these data and earlier indirect measurements of the planet's motion, which confirms the astronomers' assumption that Rayleigh scattering dominates in the planetary atmosphere.

This in turn suggests that scattering occurs from particles smaller than half a micron across – which could include hydrogen atoms and molecules, tiny dust grains or perhaps water vapor. In contrast, strong scattering at red wavelengths would have been caused by aerosols and small droplets in the atmosphere.

• The exoplanet studied by the astronomers lies more than 60 light years away from the Earth, and circles the dwarf star HD189733 in the Vulpecula constellation. It was discovered two years ago via Doppler spectroscopy – also known as the "wobble method" – which detects the presence of a planet by measuring Doppler shifts in the spectrum of the star around which the planet orbits.