A novel waveguide based on dendrimer polymer materials could yield more powerful terahertz sources as well as small and cheaper devices for optical communications.

Terahertz radiation can "see" things that are invisible to infrared and visible light, which has generated significant interest in using terahertz spectroscopy and imaging for security and screening applications. Terahertz technology is also expected to solve outstanding problems in several key research areas, including medical diagnosis, biological imaging, drug verification, and basic research in molecular biology.

However, the main barrier to the effective use of terahertz radiation in practical applications is the power levels that can be achieved from today's compact sources. Existing table-top sources exploit costly cavity mode-locked lasers, which are also limited in oscillator power, while conventional photoconductive devices are limited in power output to a few microwatts.

Now, however, Applied Research and Photonics (ARP), a start-up firm based in Harrisburg, Pennsylvania, has invented a novel technology that it believes could meet the need for a relatively high-power terahertz source in a small form factor. The technology, based on a nanostructured waveguide made from a polymeric dendrimer material, could also enable a new class of photonic integrated circuits (PICs) for use in next-generation optical networks.

Such photonic integrated circuits are expected to yield smaller and more cost-effective devices than is possible with discrete optical components, and silicon-based PICs are now being developed for a range of optical communications devices. But Anis Rahman, ARP's president and CTO, believes that "current integrated technologies suffer from limitations of materials, processing and performance". "An effective waveguide requires a core with a higher refractive index than that of the cladding," explained Rahman. "The problem with today's glass-based waveguides is that it is difficult and expensive to create those variations in refractive index." In contrast, the dendrimer-based waveguide developed by ARP exploits the natural differences in refractive index between different "generations" of dendrimer, or between doped and undoped dendrimers of the same generation. 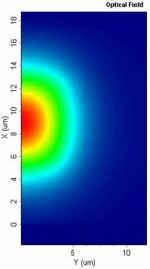 This natural variation in refractive index was discovered by Rahman when investigating the fundamental properties of dendrimers, a class of starburst polymers with a nearly spherical, monodispersed molecular architecture. Their structure is characterized by three distinct features: a central multifunctional core, tiers or "generations" of multifunctional repeat units attached around the core, and multifuntional terminal or end groups.

Manipulating these structural features also allows a controlled enhancement of the dendrimer's optical and electro-optic properties, which is important because the performance of devices such as terahertz emitters and modulators depend strongly on the electro-optical properties of the material. What's more, this enhancement increases for higher generation polymers because they have more functional end groups.

For example, a third-generation dendrimer has 32 end groups, and a dendrimer such as poly(amido amine), or PAMAM, has end groups that can accept up to two molecules of a doping species. This means that each dendrimer molecule can accept up to 64 dopant molecules, which in turn can increase its dipole concentration and so enhance the material's electro-optical properties. A fourth-generation dendrimer has 64 end groups, which could lead to an even greater enhancement.

Early results indicate that the use of doped dendrimers can indeed lead to enhanced electro-optic properties. Rahman has measured the electro-optic coefficient of the dendrimer material to be 130 pm/V, as compared with 32 pm/V for lithium niobate.

ARP has already designed a terahertz emitter based on the dendrimer waveguide, which Rahman believes could yield power levels about 1000 times greater than is possible with existing terahertz sources based on gallium phosphide, zinc telluride, and silicon. Rahman is now working to produce an experimental prototype to verify his predictions.

This is done by using a simulator based on the dendrimer's physical and optical properties to design and characterize the waveguide. The waveguide can then be fabricated using normal lithography methods, and ARP is now using Penn State University's Nanofabrication Facility to produce prototype PICs from a dendrimer film processed at ARP. "Some waveguide components have already been fabricated, while some fabrication issues are still being optimized," said Rahman.

As well as a terahertz emitter, ARP has designed an optical amplifier, an optical modulator, and an arrayed waveguide grating (AWG) that exploits a reflective design to reduce the size, lower the insertion loss and improve the reliability as compared with a conventional AWG.

According to Rahman, the big advantage of this approach is that multiple functionalities can be fabricated on a single chip. For example, ARP's design allows for on-chip integration of an amplifier with components such as a modulators, splitters and multiplexers/demultiplexers to produce components with zero loss and/or with a gain.

What's more, combining a terahertz source with a modulator on a single chip could yield a terahertz signal processor, which is not possible using electronics alone. "The dendrimer chips will break the terahertz communication barrier," said Rahman.