Klaus Ploog, the legendary MBE grower and former Paul Drude Institute academic, kicked-off the 7th International Conference on Nitride Semiconductors (ICNS) by championing the versatility of nitrides, but insisting that there are many applications that demand more development. 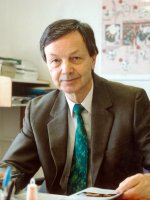 While GaN LEDs are obviously a great success, Ploog pointed out that work is needed to improve the efficiency of green emitters, as is the case for a whole host of other uses of the semiconductor.

He also said that native substrates are required for nitride laser growth, but acknowledged that progress in the last few years had been "tremendous".

One device that the GaN portfolio lacks right now is a short-wavelength VCSEL, and according to Ploog improvements in reflectivity and conductivity are the key issues to be addressed here.

Ploog pointed out that although the last five years had seen a tremendous increase in the numbers of publications on InN, there were still plenty of issues to address.

The quality of the material has not been optimized, there are still questions marks about suitable substrates, and the intrinsic electron accumulation on InN's polar surface is poorly understood.

The MBE pioneer also discussed non-polar nitrides, pointing out that these materials can be useful for much more than just bright LEDs. They can also form polarization-sensitive detectors and high-frequency surface acoustic wave devices.

Nitrides in their dilute form have already been applied successfully to long-wavelength lasers, said Ploog, but they have not yet delivered the expected improvement in solar cells.

He believes that dilute nitrides could also be used to form lasers on a silicon platform. GaP can be grown on silicon, onto which laser structures could be deposited. Lasers emitting at 900 nm have already been produced, and extending the wavelength should not pose too many problems.