SPIE, the International Society for Optical Engineering, which organises the annual Photonics West (PW) event said that last week's festival of lasers and optics in San José surpassed all expectations. 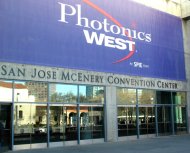 The technical conference, courses and exhibition pulled in more than 17,000 visitors during the week-long event. SPIE added that PW 2007 (see o.o's PW 2007 preview) had continued the event's tradition of being the largest optics and photonics expo in the US and the largest photonics technology conference anywhere in the world.

Besides the attractions of the trade show, the crowds were also drawn by the 3,000 technical presentations, 70 professional development courses and a careers fair featuring recruiters from at least 20 world-class companies.

"This year, we achieved a new high-water mark in terms of the quality of the conference and the quantity of presentations, exhibitors, conference attendees and exhibition visitors," commented Janice Walker, director of events at SPIE. "This translates into more scientific breakthroughs, more new products, more new jobs and more buyers than ever before."

"The combination of record-setting numbers, along with the recent billion-dollar IPO by one of our corporate members - IPG Photonics - sets an optimistic tone for the entire industry."

The mood within the exhibition halls was certainly more exciting than any time since 2000, as we reported in the optics.org blog.

SPIE technical conferences are intended to bring together engineers and scientists together to network and learn what's new in optics, photonics and imaging technologies used in biomedicine, communications, solid-state lighting and other application areas.

Such interdisciplinary dialogue was helpful to attendee Patricia Marafino, an optical engineer with Kaiser Electronics, who commented," Photonics West is the right place to find the latest laser technology and see what others are doing in this area."

"As a result of the great product offerings and great audience at Photonics West, we talked to more potential customers than ever before," said Greg Hollows, an engineer with Edmund Optics. "At Photonics West, people can see basically the entire industry in just a few days."

In its review of this year's convention, Photonics West organiser SPIE drew attention to an associated event on nanophotonics. On the closing day, the workshop entitled Building a Nanophotonics Roadmap was held. This brought together interested parties from three continents to identify and discuss issues in planning the future of nanophotonics.

The convergence group identified silicon as the medium best fulfilling the requirements of integration density, volume, and performance over cost, in such pervasive applications as fiber to the home and server clusters. The group discussing international cooperation agreed on the need for standardization in related technology areas, as well as the need for a worldwide body to discuss and promote nanophotonics.

The market issues group spent a lot of time discussing the question what is nanophotonics? and determining whether certain contemporary technologies are, in fact, nanophotonics already in production. Charts were displayed showing market projections for the next decade, with the areas of lighting, displays, and optical interconnects offering the most near-term development.

The key barrier to high volume production in nanophotonics is cost, the fourth group reported. Realizing a common process platform is a critical element in growing the market, they said. Research institutions can play a key role in developing a comprehensive picture of processing options and requirements. The group recommended that precompetitive activities be undertaken to develop standards, including the identification of de facto standards, and focusing on areas where standardization is most likely.

More information about Photonics West is available online and papers presented at symposia will soon be downloadable from the SPIE Digital Library.

Next year Photonics West is set to take place between 19-24 January 2008 at the McEnery Convention Center in San José, Ca, US. And again it will be concurrent and co-located with SPIE's BiOS 2008 Biomedical Optics Symposium and Exhibition. The Biomedical Optics Exhibition, which has already announced it is expecting at least 130 companies, will take place between 19-20 January 2008.