Physicists in the US have created the first nanoscale coaxial cables for the transmission of light.

Operating much like the coaxial cables used to distribute television and radio signals, "nanoscale" cables can transmit light with wavelengths nearly four times their 200 nm diameter. 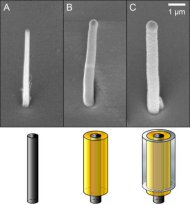 Coaxial cables comprise an inner and outer conductor separated by an insulating dielectric layer and are used to transmit all manner of electromagnetic waves from radio to microwave. They are extremely useful because they can transmit waves with wavelengths much greater than their diameter, making cable television and other technologies possible.

Light is an electromagnetic wave so there is no reason why it cannot be transmitted in a similar manner via a coaxial cable - but conventional wisdom had held that light could not travel through a cable of diameter less than its wavelength. Now, Boston College's Jakub Rybczynski, Mike Naughton and colleagues realized that a coaxial could carry sub-wavelength light waves if it were miniaturized.

Their coaxial cable is based around a carbon nanotube, which forms the central conductor (see "nano-coax" diagram, above). The nanotube is surrounded by a concentric ring of transparent aluminium oxide - which acts as the dielectric layer - and finally a concentric metal ring that acts as the outer conductor. The separation between the inner and outer conductors is about 100 nm.

Some of the central conductor protrudes from the cable and acts like an "antenna", gathering light and sending it down the cable. The cable works exactly like a conventional coax, constraining the transverse electric and magnetic fields of the light wave between the two conductors, thereby guiding the light along the cable for distances of up to 50 &microm. While this is not very far, it could allow the structures to be exploited in a number of ways.

Naughton and Rybczynski said that the cable's ability to control light over sub-wavelength distances could be exploited to solve a wide range of technological problems. For example, the dielectric material could be replaced by a photovoltaic material like silicon, which would convert the light to electricity. This could be used to create better solar cells that exploit the cable's ability to constrain the light wave into an area smaller than its wavelength, thereby boosting the efficiency of the conversion process.

This ability to constrain light could also be exploited in new optical microscopes and optical techniques for processing computer chips that can resolve features smaller than about half the wavelength of light - something that conventional optics cannot do. The researchers also believe that the technology could someday be used to fabricate components for optical communications including switches that stop the flow of light by applying an electrical signal across the inner and outer electrodes.