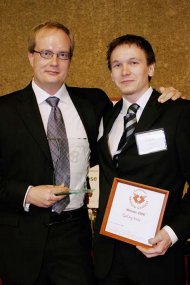 • Top places in the European Venture Contest 2006, organized by the European Venture Institute, were awarded to three relatively new optics related companies. The winner from the 485 initial entrants was Finnish company EpiCystals and runners up were Portuguese-based optical sources developer Multiwave and Ireland's SensL. The final jury and award ceremony took place in Lisbon in December. Tomi Jouhti and Janne Konttinen from EpiCrystals (as featured in Optics & Laser Europe's Finland focus in July 2006) are pictured with their award (right). The European Venture Contest is the only pan-European competition with an exclusive focus on top technology ventures showing "the ambition and potential to reshape their industry and conquer the international market".

• Powerlase, a manufacturer of powerful nanosecond Q-switched, diode-pumped solid state lasers, has opened a service centre in Korea. The office is located in the city of Daegu and will act as a service centre for the company's Korean customer base, which includes plasma display panel giants Samsung and LG.

• Philips Electronics announced at the end of December that it has achieved full ownership of Philips Lumileds Lighting. Philips acquired Agilent LED International's stake in Lumileds last year, and has now acquired the remaining 3.5% of share capital from Lumileds staff. A one-time charge of €8 million will be taken in the financial results for Q4 2006. "Philips now owns the entire value chain, from technology expertise to in-depth customer knowledge, which gives us a real competitive edge," said Theo van Deursen, CEO of Philips Lighting.

• Philips Electronics also announced it has completed the cancellation of more than 86 million shares which were acquired in its share repurchase program initiated in July 2006. All shares were acquired by December 19, 2006, at an average repurchase price of €27.4 per share. As such, Philips has completed around €2.37 billion of the €4 billion return to shareholders announced in August 2006.

• Cascade Technologies, a leader in the application of quantum cascade lasers, has signed a distribution deal with Clyde Bergemann Power Group to develop and market its revolutionary emissions sensing technology worldwide.

• Datalase has completed a distribution agreement for the US, Canada and Mexico with Ferro Corp., a global supplier of performance materials. The deal will see the two partners working together to develop a special laser marking aerosol containing the Datalase pigment for applying variable information onto metal or painted metal components.

• PerkinElmer this week announced the acquisition of a range of Dynamic Mechanical Analysis products from Triton Technology. "This acquisition will give customers a best-in-class thermal analysis tool," said Robert Friel, president of PerkinElmer Life & Analytical Sciences.

• Ignis ASA's subsidiary, Fi-ra Photonics has secured another fiber-to-the-home component contract in Korea with a value in excess of $4 million. The components will be delivered during the first half of 2007. Fi-ra Photonics is a 50.1 percent owned subsidiary of Ignis ASA. "We are experiencing an impressive scale and speed of growth in Korea, one of the fastest growing FTTH markets in the world," said Thomas Ramm, Ignis CEO. In 2006 Korea Telecom continued the rollout of its new and rapidly expanding passive optical network. Fi-ra Photonics was the major provider of splitters for this deployment. In 2007 Korea Telecom plans to go nationwide with its FTTH expansion and consequently roll out of between 800,000 and 1 million PON lines across the country.

• Pacer International, leading supplier of optoelectronic, display and laser solutions, has opened a new office in Blue Bell, Philadelphia, which becomes the headquarters of the company's North American operation, Pacer USA. Pacer has appointed David House to head the US sales and support team. He joins Pacer from PerkinElmer, where he was Western US Sales Leader for the Optoelectronic Industrial Sensors Division.

• As of this week, Qioptiq subsidiary Linos has two new members on its supervisory board of Linos AG: Gerd Litfin and Nils Stoesser. The pair are taking over the positions on the board previously held by Reinhold Barlian and Gottfried Neuhaus, who resigned at the end of 2006. Gerd Kastrup remains a member of the board but Litfin is expected to take over as Chairman from Kastrup in due course. Litfin was the founder of the Linos Group and CEO until the end of December 2006.