Indium Tin Oxide (ITO) is no longer the only option for OLED anodes, say researchers in Canada. Carbon nanotubes can do the job too.

Researchers in Canada claim to have demonstrated OLEDs based on carbon nanotube anodes that are 70% as efficient as comparable ITO devices (Applied Physics Letters 88 183104). This, according to the team, proves the nanotube-based anodes are a viable alternative to transparent conducting oxides. 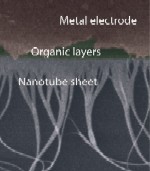 Carbon nanotubes also offer extra benefits such as increased material flexibility and hardiness. This could make them an attractive alternative to transparent conducting oxides for OLEDs in new areas of display and lighting applications.

By applying the appropriate chemical treatment, the team believes that nanotubes could also replace the metal cathodes found in OLEDs. This would allow the devices to emit light from both sides.

"We have been working with this outstanding material for several years and the idea of implementing carbon nanotubes came naturally because of our research interest," Richard Martel, one of the researchers at the Regroupement Québécois sur les Matériaux de Pointe (RQMP) in Quebec, told optics.org.

"The nanotube films are conductive and transparent fabrics and this is clearly the main advantage. It opens up new possibilities for see-through displays and other advanced geometries, plus it is light-weight. Overall it appears more robust as a base technology for electronic paper," added Martel.

The researchers fabricated their single walled nanotubes (SWNT) using a pulsed laser vaporisation technique. Once integrated into the OLED, the device's I/V characteristics and efficiency were examined and compared to ones made under the same conditions on ITO-coated glass substrates. The results showed a luminance efficiency of 1.4 cdA-1 for the SWNT-OLED, compared to 1.9 cdA-1 for the ITO-based version.

"We are now doing work on exploring different geometries and doping the nanotube sheets to achieve better sheet resistance and transparency," concluded Martel.