A regular round-up of staff changes within the industry featuring Varioptic, Kaleido, Laserlines and more.

Howard Ford, former president of business communications firm Equant EMEA, has joined Varioptic, an expert in liquid lens technology, as chairman of the board. Currently non-executive chairman of Servista, a UK provider of customer care and billing solutions, he was formerly chief executive of mobile phone operator BT/Cellnet (now O2). Ford began his career at IBM Europe, where he progressed to the position of general manager of the IT giant’s European PC business. 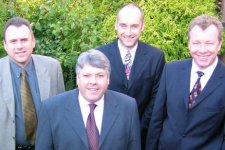 Following a successful management buy-out at Laser Lines, UK, Ralph Wilkin has accepted the post of managing director (MD). Gary Broadhead, Steve Knight and Michael Turner complete the board of directors. Former MD Ted Paine, who has been with the company for 30 years, will act as a consultant to the firm.

Kaleido technology, a specialist in ultra-precision moulded and machined optics, has signed up Jesper Wolf Bek as its new CEO to lead the Danish firm on a mission to further international growth. Bek has previously worked for Intel and brings a wealth of sales, marketing and management experience from positions served in Asia and Europe. Former CEO, Jesper Boie Rasmussen, will move across to the role of chief technology officer as the firm looks to develop its core competence, which includes glass aspheres and freeform lenses.

Melles Griot has appointed William McCreath as director of engineering of its Rochester-based, US, optics group where he will manage product development, optical engineering, inspection and testing activities. Additionally, McCreath will interact with Melles Griot KK, Tamagawa, Japan, to exploit shared opportunities for the firm’s engineering resources.