A festive pick of this year's patent applications including a light scattering bauble and a telescopic Christmas tree.

German inventors believe that their self-contained LED lights, an alternative to traditional wax candles or strings of electrical lamps, could make Christmas safer by avoiding the risk of fire or electrical shock. Powered by a NiH rechargeable battery, each unit contains white and yellow or yellow and red LEDs that can be modulated to give the impression of a flickering candle. The device also includes a photodiode sensor to allow on/off remote control via an infrared LED transmitter. According to the applicants, individual lights should be able to operate for several hours on a single charge. Onboard electronics transform and regulate the LED power supply.

Austrian optical and cut glass specialist Swarovski has come up with a decorative element that exploits a range of optical phenomena to create coloured and patterned effects. Containing an internal LED light source, the hollow bauble features a partly transparent and semi-reflective wall, which is covered with light scattering or light-refracting particles. 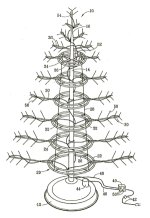 US inventors have devised an electrically-powered artificial Christmas tree that pops-up at the flick of a switch. The telescopic unit, which features a network of light emitting elements, extends from its base up to a height of around 2 m. Made from a mix of polymers and metals, the tree assembly packs flat for easy storage.
RELATED LINKS