Researchers use a laser initiated shock wave to accelerate particles into animal tissue.

High-power laser pulses provide a new way of delivering drugs into the skin or other parts of the body, say scientists in Japan. An alternative to needle-based methods, the technique relies on the sudden expansion of a drug coated metal film, induced by a 0.25 GW laser pulse, to launch pharmaceutical particles into adjacent tissue. (Appl. Phys. Lett. 87 163504) 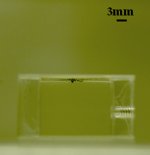 The team activates its coin-sized device by focusing 1064 nm emission from a Q-switched Nd:YAG laser on to the back surface of a glass substrate coated with a 100 µm thick aluminium layer. The incident 5.5 ns laser pulse causes the metal layer to deform suddenly via a reflected shock wave. Particles deposited on the film's top surface are thrown off with sufficient momentum to penetrate nearby soft targets.

Previous attempts at needle-free drug delivery, such as those pioneered by Oxford University, UK, and its spin-out Powderject, have used a helium gas flow to accelerate drug particles.

According to the team from Tohoku University's Interdisciplinary Shock Wave Research Center (ISWRC), one advantage of its fiber-coupled device is the unit's compatibility with existing surgical apparatus. For example, the scientists are confident that the device could be adapted to suit medical tools such as endoscopes.

Keen to commercialize its research, the group has already used a bench-top prototype to successfully deliver 1 µm diameter tungsten particles into rat liver tissue. "As far as vaccine/DNA delivery into human skin in concerned, the device can be used with some slight modifications," ISWRC researcher, Viren Menezes told Optics.org. "For drug delivery to non-approachable sites in the body, the device has to be miniaturized." Menezes expects the group's second prototype to be ready in about 12 months.