Scientists have come up with a low-cost process that improves the performance of polymer-based photovoltaics.

Researchers in the US have found a simple way of increasing the efficiency of polymer-based photovoltaics (PVs) that could make harnessing solar energy more cost-effective. Using a slow growth process, a University of California at Los Angeles (UCLA) team has fabricated polymer devices with a National Renewable Energy Laboratory, US, certified power-conversion efficiency of 4.4%. The team claims that this figure is the highest published so far for polymer-based solar cells. (Nature Materials AOP) 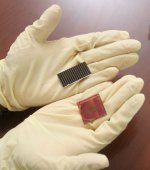 "The most important step was to realize the effect of film growth rate on device performance," UCLA's Yang Yang told Optics.org. "Ordering the polymer chains results in higher absorption [of incident light] without increasing the parasitic series resistance of the device."

Sandwiched between a transparent indium tin oxide coated anode and a deposited aluminium cathode, the PV film consists of a spin-coated blended polymer. Yang and his colleagues control the growth rate of the polymer layer, which measures 210-230 nm in thickness, by varying the time it takes for the initially wet film to solidify.

The researchers discovered that slow grown films, which take around 20 mins to form under ambient conditions, provide superior charge transport compared with polymers processed more rapidly at higher temperatures. According to the team, slow growth allows the polymer to self-organize, a process that dramatically boosts device efficiency.

Simple and cost-effective to produce, polymer-based solar cells are an attractive solution for designers looking for a renewable energy source, especially for large area applications. However, as Yang points out there are still hurdles to overcome.

"Two of the biggest challenges that remain are device lifetime and efficiency," he explained. "To enter large scale commercialization, the device efficiency will have to reach up to 15%, with a lifetime of up to 15-20 years."

The team expects to double the efficiency of its devices within a year and is keen to commercialize the technology. Back in the lab, the group is now exploring a range of material systems to enhance carrier mobility and increase absorption in the red region of the solar spectrum.