A network of futuristic bus stops featuring solar panels and white LEDs is planned for London.

Thousands of solar powered bus stops that light up automatically at dusk are set to transform the gloomy experience of waiting for a bus at night in the UK's capital. The £7.9 million ($14 million) Transport for London project, which is set to run over five years, combines the latest white LED technology with photovoltaics. 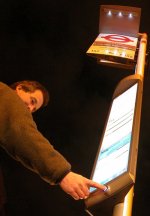 Each bus stop features a photovoltaic covered canopy that collects energy from the sun. Power gathered during the day is stored in batteries and used to illuminate the timetable display, signage and passenger waiting area during the night.

"We've now got a unit that can sit on top of an ordinary British bus stop and provide light all year round," said Ivan Bennett, research and development manager, Transport for London. "It's an environmentally friendly improvement that is relatively cheap to build, costs no extra to run, and will make a big difference to passengers."

Assembled in the UK by Trueform Engineering, the hi-tech bus stop features solar technology supplied by Canadian firm Carmanah Technologies and is said to work even in the dullest of weather conditions.

Carmanah has been involved with the London project from the outset, delivering its first prototypes in the fall of 2001. The company's technology has been rolled-out across a number of cities worldwide including Seattle, US, Vancouver, Canada and Edinburgh, Scotland.