NIST engineers measure the diameter of tiny holes by imaging the shadow of a microsphere tipped fiber.

US technology and standards agency NIST thinks its fiber deflection probe could be ideal for quantifying difficult to measure deep, micron-sized holes found in fuel nozzles, printed circuit boards and ink jet printer heads. The team claims that its low contact force probe can measure 100 µm diameter holes with an uncertainty of just 35 nm to a depth of around 5 mm. 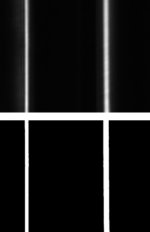 While optical techniques, such as microscopy, are quick and easy to use they are limited by focal depth. On the other hand conventional contact probes, which operate in conjunction with coordinate measuring machines (CMMs), are restricted to hole diameters of larger than 300 µm.

The NIST probe consists of a 50 µm diameter fiber, 20 mm in length with a 75 µm glass microsphere bonded to its end, which acts as a tip. Using a camera, the NIST scientists capture the shadow cast by the LED illuminated fiber stem as the probe is moved down into the hole, touching the interior walls.

Because the fiber acts as a cylindrical lens, it focuses the background LED light into a bright band that is much thinner than the fiber. This gives the camera a sharp reference line within the fiber's shadow that suits edge detection algorithms and is key to the probe's high accuracy.

Observed along two axes, the shadow of the fiber probe's stem reveals the amount of deflection at the tip. By comparing the fiber's free and deflected states, the NIST team can correct the CMM's final position and accurately determine coordinates of the hole. However, NIST is not the only metrology institute tackling this issue by using a fiber-based ball probe.

"Our approach has aspects in common with probes developed at PTB and commercialized by [CMM manufacturer] Werth, but at present our stem sensing technique seems to achieve higher accuracy," NIST researcher Bala Muralikrishnan told OLE. "They observe their ball probe directly as seen deep inside the hole, rather than observing the stem outside the hole against a constant background."

Currently, the NIST team is miniaturizing its optical set-up and is looking at ways of improving probe manufacture, such as simply melting a ball at the end of the fiber.