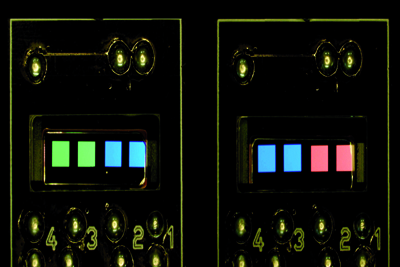 OLED microdisplays are increasingly establishing themselves in consumer-ready wearables and data glasses. In order to meet the requirements for higher efficiency, higher contrast, and higher resolutions in these applications, Fraunhofer FEP scientists have developed a new micropatterning approach for OLEDs on silicon substrates.

They say that this might eliminate the use of color filters and shadow masks in the future and allow full-color displays to be developed by means of a new process. An increase in efficiency and considerably broader color gamut have already been demonstrated in first experiments. The results will be presented at the Fraunhofer FEP booth and during the poster session at IMID 2018 in Busan, South Korea, between August 29-31.

OLED microdisplays, besides conventional smart phones, are increasingly finding applications in data glasses for current and future Virtual Reality (VR) and Augmented Reality (AR) applications, the core of which is the microdisplay.

Thanks to the shallow overall depth that results from the self-luminous properties of OLEDs and their excellent contrast ratios, manufacturers are increasingly turning to OLED microdisplays for AR/VR glasses. Fraunhofer FEP has been continuously involved in the advanced development of this technology for several years.

Nevertheless, say the FEP scientists, there are still some technological challenges that need to be solved in order to exploit the full potential of OLED technology for use in consumer-ready data glasses and other AR/VR applications. Very high brightness and efficiency, good yields for large chip areas, curved surfaces, integrated eye tracking, and transparent substrates are some of the tasks still on the researchers' agenda. 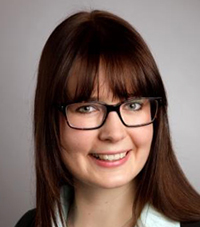 Currently, OLED technology faces the hurdle that full-color displays can only be realized by using color filters or shadow masks, which limit OLED efficiency and resolution. Researchers are working intensely on new approaches to fabricate microdisplays characterized by high resolution while at the same time offering high efficiency and long operating life time.

The patterning of the organic layers of OLEDs is one of the greatest challenges, since conventional methods such as photolithography cannot be utilized with organic semiconductor materials. The use of electron beam technology for microstructuring was successfully demonstrated at the Fraunhofer FEP two years ago. Using its patented process, FEP was able to modify the emission of an OLED through the existing encapsulation layer to create any feature imaginable and even produce high-resolution grayscale images.

Further development of the electron beam process has now achieved full-color OLED without using color filters or shadow masks. To create red, green, and blue pixels, an organic layer of the OLED itself is ablated by a thermal electron beam process. This patterning causes a change to the thickness of the layer stack, which makes the emission of different colors possible.

FEP says this is the first major step towards the development of full-color displays without the use of restrictive color filters in the process. Elisabeth Bodenstein, developer in the Fraunhofer FEP project team, explained the advantages thus: “With our electron-beam process it is possible to thermally structure even these sensitive organic materials without damaging the underlying layer.”

The results were obtained by simulating and initially estimating the HTL (hole transport layer) thicknesses that are produced by the electron beam. The researchers actually achieved the decoupling of red, green, and blue emissions from the white OLED. Following proof of concept at Fraunhofer FEP, these colors were demonstrated on the first test substrates, exhibiting comparable OLED performance.

In addition to using this new process for OLEDs, electron beam processing can also be used for other applications in organic electronics and inorganic layers. Moreover, the electron-beam patterning process is very adaptable and can also be employed in the areas of photovoltaics, MEMS, and thin-film technology. 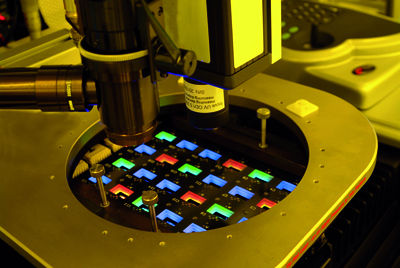 Now Fraunhofer FEP scientists are approaching the next milestones, having completed the promising preparatory work. The main goal in the coming years is to use this new method in jointly developing fabrication of OLED microdisplays with partners and establish it in the industry through licensing. To do this, the features will be further miniaturized and the process optimized by working together with interested partners from industry.

The next step planned is to integrate the micropatterning into existing processes in order to gain further know-how jointly with industrial partners. This should enable future transfer of the test results into an existing process line to be worked out in order to facilitate establishing the technology at the industrial level at a later date.

In parallel, the scientists are also planning an enhanced simulation of OLEDs. The OLED color spectrum will be broadened by suitably modifying the materials and layer thicknesses. In this way, the prospective incorporation the displays in data glasses for special applications such as in industrial manufacturing and medicine should be opened up with the new process.

The development of the new technology is the result of a project funded by the Fraunhofer-Gesellschaft. Now the scientists are ready for specific advanced development of the technology through partnerships and joint projects with display, plant, material and system manufacturers. The results with first colored OLEDs will also be presented at the Fraunhofer FEP booth no. 50 and in poster session III during the International Meeting on Information Display - IMID 2018 in Busan, South Korea, August 29-31, 2018.