Executive team confident that softening of key market sector will be temporary. 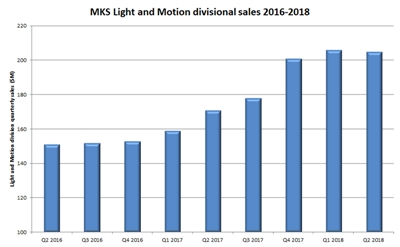 MKS Instruments, the company that acquired Newport and its diverse range of photonics technology brands two years ago, has posted a record-breaking quarter in its latest set of financial results.

For the second quarter of the year, the Andover, Massachusetts, firm logged a best-ever sales figure of $573 million, up around 20 per cent year-on-year. That translated to a record profit on the bottom line, as net earnings came in at $123 million.

But indications of a temporary slowdown in demand from the critical semiconductor capital equipment sector seemed to spook investors, with the MKS stock price ticking down by 8 per cent in trading shortly after the earnings release.

Light and motion
Although MKS’ revenues are generated by a wide range of products – many of which do not rely on photonics - the recent strong performance is due in no small way to growing sales of Spectra-Physics lasers, beam analyzers, motion control equipment and more product lines acquired via the Newport deal.

MKS’ COO John Lee told an investor conference call discussing the latest results that the Newport-related assets, now referred to as the company’s “light and motion” division, posted quarterly sales of $205 million, up 20 per cent year-on-year.

Lee added that sales of lasers had jumped 48 per cent year-on-year compared with the first half of 2018 – indicating the recent buoyancy of the market for semiconductor capital equipment.

However, that buoyancy has receded in recent weeks, resulting in what MKS’ CEO Gerard Colella described as a “pause” in demand. As a result, total company sales in the current quarter are expected to slip to between $470 million and $510 million.

On the plus side, Colella and his team are confident that - unlike some semiconductor equipment downturns in the past – the current market softening is not expected to last for too long.

"There will be some adjustments," he told the analyst call. "But I've been at this for 35 years and my suspicion is that this will be hopefully a moderate situation and it won't be [one of] those wild fluctuations we saw in the past...the demand factors are much different than they used to be back in the day."

‘Surround the workpiece’
Commenting specifically on the laser side of the business, Lee told analysts that demand from China for materials processing applications remained “very healthy”, adding that the company had recently secured a “significant order” for ultraviolet lasers to be used in mobile phone manufacturing.

That is one area where MKS’ Spectra-Physics laser division faces competition from fiber laser firm IPG Photonics, but Lee said that the more conventional laser sources were still holding their own.

With so many different product lines at its disposal, MKS is following a “surround the workpiece” strategy in the area of materials processing – meaning that it sells not just a laser, but beam diagnostics, precision motion equipment, focal spot analyzers and more.

“That's really where we see the largest opportunity,” Lee said. “And that's where we are making our largest investments to make sure we capture those opportunities.”

Debt down
Though it represented almost a 50 per cent premium at the time, the near-billion-dollar acquisition of Newport completed by MKS in 2016 looks to be paying off. At an investor day last month, MKS noted that its sales of industrial lasers topped $100 million in 2017 – up more than 70 per cent on the $55 million reported under Newport in 2015.

That increase and MKS’ lower-cost procurement strategy for sourcing parts and materials has also translated to much-improved profitability, with CFO Seth Bagshaw noting that the light and motion division’s operating margin had more than doubled in the two years since the Newport acquisition was completed. Partly as a result of that, MKS has already been able to pay off a large chunk of the debt it raised to finance the Newport deal.

• Despite the executive team’s optimism of a short-lived hiatus in demand from the semiconductor sector, the MKS stock price slumped in value by around 8 per cent on the Nasdaq index following the release of the latest results.

Now trading at around $90, MKS’ valuation has slipped back from the all-time high of just over $128 reached earlier this year. The firm’s market capitalization currently stands at just under $5 billion.