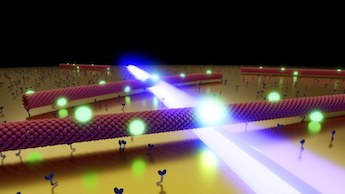 A number of different techniques to overcome the inherent diffraction limit in optical microscopy have been developed in recent years, including the fluorescence-based methods recognized by the 2014 Nobel prize for chemistry.

Quantum dots—semiconductor particles around ten nanometers in size within which single electrons can be tightly confined—offer another route to potentially ultra-high resolution, especially when combined with the ability of metal surfaces and nanostructures to localize or enhance optical fields.

Under the right circumstances, these local field enhancements can modulate the absorption and emission rates of optical emitters by several orders of magnitude, boosting the signal-to-noise ratio and allowing better discrimination of the species under examination. However, techniques to exploit this effect have to date been limited in terms of throughput and resolution.

A team from Julius Maximilian University of Würzburg (JMU) and TU Dresden has now demonstrated a new approach to the application of quantum dots in super-resolution microscopy, in which biomolecules are used to carry the dots over a surface in large numbers. The study was published in Nature Nanotechnology.

"These two elements are among the fundamental components of an intracellular transport system," commented Stefan Diez of TU Dresden. "Microtubules up to several tenths of millimeters in length form a major network of transport routes inside cells. Motor proteins run along these routes, transporting intracellular loads from one place to another."

Resolution below five nanometers
The team designed a structure in which the motor proteins were fixed to the surface of a thin gold substrate, and the microtubles then passed over that surface. Quantum dots were attached to the microtubles, effectively allowing a swarm of quantum dots to glide in different directions across the surface of the gold layer, while being stimulated into emission by a 488-nanometer laser shining through 250-nanometer slits in the substrate.

Employing a high number of quantum dots in this way allows a large area to be scanned in a short period of time, and in its published paper the project noted that the deterministic motion of the quantum dots allowed for the interpolation of their tracked positions, resulting in an increased spatial resolution and a suppression of localization artifacts.

The team characterized the operation as allowing "measurement of light fields at a resolution below five nanometers in an experimental set-up that resembles a classical optical microscope," and commented that this "makes it possible to determine the position of the quantum dots ten times more accurately than with previously established high-resolution microscopy methods."

Control of near-field interactions between light and matter is of great interest in topics such as quantum communication and light harvesting, along with potential uses in biomedical sensing and diagnosis, where quantum dots may be a route to rapid detection and monitoring of clinical conditions without complex laboratory-based equipment.

"Our technique can be readily applied to a variety of surfaces for scalable, nanometer-resolved and artifact-free near-field mapping using conventional wide-field microscopes," commented the project team, which will next use this molecular transport system to couple quantum dots to specifically prepared optical near-field resonators to study their interaction.