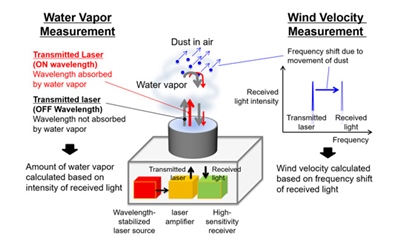 Mitsubishi Electric is set to unveil a new lidar system said to be capable of forecasting outbreaks of torrential rain, potentially offering an earlier and more reliable indication of exactly where to evacuate in advance of extreme weather.

The combined wind lidar and water vapor differential absorption lidar (DIAL) demonstrator system is currently in early tests, and will also be on show at this week’s Ceatec Japan 2018 technology trade show in Chiba.

“The tests are expected to demonstrate that the system simultaneously measures water vapor in the air and upward air currents, which cause cumulonimbus clouds, quicker, more accurately and in a wider range compared to conventional alternatives,” announced the company.

“Going forward, Mitsubishi Electric expects to make further improvements prior to launching a commercial system for the extra-early forecasting of torrential rain.”

Mitsubishi Electric explains that the new system is based on a conventional lidar it released back in 2014, with the added capability of monitoring atmospheric water vapor from the ground. That should result in simultaneous quantitative measurements of water vapor concentration with altitude, as well as the wind speed and direction.

With extreme weather events expected to increase in frequency and severity under the influence of a warming climate, Mitsubishi says that in the case of torrential rain early warnings are critical for enabling safe evacuations.

The past week alone has seen multiple fatalities from flash-floods in south-western France and the Spanish island of Mallorca - the latter in particular from highly localized torrential rainstorms that are currently difficult to predict with sufficient precision for reliable evacuations.

Fiber system
The company points out that conventional weather radars are of limited utility because they can only observe cumulonimbus stormclouds after they have formed. In contrast, lidar-generated data would indicate when and where such clouds are forming in real time, thus providing an earlier warning.

Mitsubishi also claims that the pulse energy produced by the waveguide amplifier represents a new world record. The hybrid system calculates water vapor levels by measuring the absorption at 1.5 µm caused by molecular vibration, and the wind direction and velocity according to the frequency shift of laser light scattered by aerosol particles in the atmosphere.

Mitsubishi Electric says that its planar waveguide amplifier design has enabled measurement of a wider range of wind speeds than is possible with more conventional Q-switched oscillators based around a diode-pumped laser source.

“All of the optical elements are connected using optical fiber, making the system configuration compact, flexible, and unaffected by environmental factors such as temperature and vibration,” it claims, adding that the associated high-speed signal-processing technology digitizes and analyzes the received signals much faster than conventional approaches, providing real-time output.