Supplier base continues to grow in response to smartphone sensor deployment and emerging opportunity in autonomous vehicles. 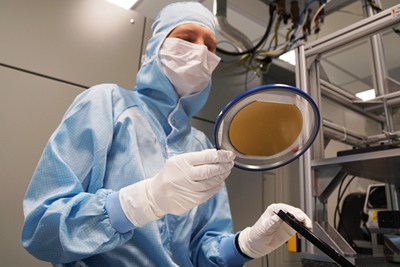 Philips Photonics’ production of vertical-cavity surface-emitting lasers (VCSELs) is poised to double by early 2018, following a five-fold increase already achieved in the past three years. The expansion is thanks to completion of a development project, and in response to growing market demand.

With the likes of Apple now seeking large and reliable supplies of VCSEL arrays for user identification through facial mapping sensors, Philips Photonics is one of a select but growing band of suppliers with the necessary expertise and scale to produce the devices in such volumes.

“With the digital revolution firmly underway, the market need for VCSELs is rapidly accelerating,” said general manager Joseph Pankert. “Anticipating this demand, over the past few years we have invested consistently in research, product development and efficient manufacturing processes.”

Automated production
Under the $23 million “VIDaP” project, funded jointly by the European Union and Germany’s Ministry of Education and Research, Philips Photonics worked with the likes of epitaxy foundry IQE, imaging firm SICK, and semiconductor giant STMicroelectronics as it built a fully automated production line based around 4-inch gallium arsenide wafers.

In early 2018, the annual capacity of the firm’s VCSEL facility in Ulm will leap to 15,000 wafers, with plenty of scope to expand further, if required. “This is more than a ten-fold expansion in capacity compared to pre-VIDaP,” Pankert said, adding: “Everything is ready to move to 6-inch [wafer production] if necessary.”

The four-year VIDaP project, which officially ended September 26, resulted in Philips making more than 500 million devices over the past two years – up from only 200 million in the previous decade. Other partners included datacom specialist Mellanox and industrial production equipment firm Sidel, reflecting the wide field of applications in which VCSELs are expected to find use in the future.

Global supply
While VCSELs have for a long time been used in short-range optical links and consumer electronics applications – notably inside optical mouse peripherals and Blackberry navigation buttons – the market has remained relatively small.

Pankert believes that this is about to change, and that the advances made under VIDaP will secure the Philips unit a leading position as a European supplier.

At a regional level, there could be growing competition in the form of Austria-headquartered ams, which has just revealed plans to build a fabrication facility in China following its recent acquisition of VCSEL developer Princeton Optronics.

Elsewhere, supply is dominated by US-based Lumentum and Finisar, while II-VI is also in the midst of a significant capacity expansion including a move to 6-inch wafer production. That investment is thought to have been prompted by the anticipated demand for emitter arrays from Apple initially, with other smartphone makers expected to follow with their own versions of facial identification technology.

Commenting on the anticipated increase in demand for VCSELs, Pankert said: “It is really across the board. 3D [sensing for] smart phones is a major driver, although optical datacom is also entering the consumer space, with growing demand for industrial applications also.”

Automotive lidar
Much like the way that Apple’s new “Face ID” iPhone security feature maps out the contours of its owners face, it is thought that higher-power versions of the technology could enable self-driving cars to map their immediate surroundings using lidar.

Another VCSEL maker, the Sandia National Laboratories spin-out TriLumina, is working on arrays of the devices for what could become an enormous future market in autonomous vehicles – with the dozens of lidar companies attracting venture capital investment recently all requiring a supply of laser components for their own specific approaches.

“Specification for automotive lidar is not finally settled, but it looks like there is no reason to use a wavelength different to that found in smartphones,” Pankert said. “The required power levels can be achieved with VCSEL technology, and of course other suppliers can also do this. However, what counts in automotive is the ability to meet the stringent quality and reliability requirements, and to support customers in system design.”

He points out that VCSELs are new to most of the potential customers in this emerging field, making the support and reliability aspects critical – areas where Pankert believes Philips Photonics has particular strengths.

Estimates of the potential size of the VCSEL market vary, with BCC Research suggesting last year that annual sales could exceed $2 billion by 2020, and others projecting a more modest $1 billion market by 2022.

With several of the VCSEL makers ramping their capacity, an obvious concern is whether there will be sufficient demand to meet everybody’s expectations.

Pankert responds that sheer capacity is only one element of the challenge, saying: “Since demand for VCSELs shows strong growth, it attracts a lot of investment throughout the industry. We clearly believe that the demand will increase further, but it is difficult to say whether we shall see excess investment anytime soon.

“It is important to note that VCSEL development is still at the beginning of its life cycle, and we can expect many innovations in the years to come. Innovation capability is as important as manufacturing capacity.”