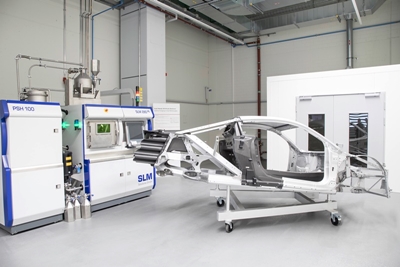 Germany-based laser additive manufacturing system builder SLM Solutions says it has landed a contract to provide 50 of its “SLM280” series machines to a customer in China – the company’s largest ever sales deal.

Based around fiber laser sources supplied by IPG Photonics, the SLM280s can be configured in either single-laser or dual-laser arrangements, with individual laser output powers of up to 1 kW and a maximum “build rate” of 55 cm3 per hour.

Asia presence
SLM says that the bumper sales deal follows another order for ten of its “SLM500” machines received in June, from another Chinese customer – vindicating the company’s establishment of local subsidiaries in China, India and Singapore.

“Since its IPO in 2014, SLM Solutions has pursued the objective of gaining a firm foothold in Asia,” stated the Lübeck firm. “This major order is an important step in promoting further growth in this important region and once more underscores the strong global demand for additive production facilities suitable for industrial applications.”

The 50 machines on order will be shipped over the next three years, and SLM believes that the deal represents one of the largest orders ever placed in the area of additive manufacturing in China.

With their inclusion of multiple high-power lasers, the SLM280 machines are said to offer customers a high level of productivity with the selective laser melting technique. The higher power translates directly to faster production and, in principle, a lower production cost per metal component fabricated.

SLM is currently in something of a transitional phase, after a planned acquisition by GE fell through in late 2016 when SLM shareholders rejected the offer. The fall-out from that saw Markus Rechlin fired from the CEO position, with former CFO Uwe Bögershausen taking over lead executive responsibilities.

Commenting on the 50-system order, Bögershausen said: “This contract shows that we are absolutely right in focusing on developing long-term customer relationships and underpins our long-term growth trajectory as an independent German company. The order also underlines the high suitability of SLM’s machines for the industrial production of parts in high quality.”

Production machine trend
In its latest financial report, covering the first half of 2017, SLM posted a 13.5 per cent decline in revenues compared with the prior year, but also an uptick in orders for higher-priced machines to be used in production applications, with Bögershausen describing the wider additive manufacturing sector as being “in a state of flux”.

“We are succeeding in placing production-oriented and, as a consequence, higher-quality systems in the market,” he wrote in his letter to shareholders, adding that while the dip in SLM’s first-half revenues to just under €29 million did not reflect that trend, he was still hopeful of hitting full-year targets.

Bögershausen and colleagues expect to post full-year revenues of between €110 million and €120 million for 2017, something that will require a very strong second half and fourth quarter in particular.

The huge new order from China will doubtless help with that, while SLM is also busy completing its new company headquarters building – still in Lübeck – which it is planning to move into in spring 2018.