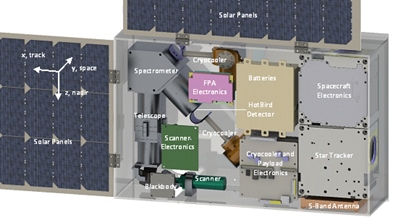 by Ford Burkhart in San Diego
CubeSats, the versatile little cousins of older, perhaps billion-dollar, remote sensing vehicles, are attracting growing support at NASA due to their low cost and, surprisingly, their superior skills in certain tasks for predicting global weather and lots more.

That was the message from one of the space agency’s leading experts on CubeSats at SPIE’s Optics+Photonics event in San Diego this week. Thomas Pagano from the Jet Propulsion Lab (JPL), in Pasadena, California, spoke in a plenary session focused on remote sensing.

Infrared applications
Pagano, who is project manager for the Atmospheric Infrared Sounder (AIRS) program at JPL, said NASA is developing new technologies for use by CubeSats in vital weather prediction and a variety of other applications. The CubeSat approach offers "big science in a little package", he told delegates.

Pagano is also principal investigator for the CubeSat Infrared Atmospheric Sounder (CIRAS) program, whose inaugural launch on a commercial satellite is expected in 2019. It will measure radiation in the mid-wave infrared (MWIR) spectrum. CIRAS partners include Ball Aerospace for the systems, BAE Systems in Colorado, IR Cameras, and Blue Canyon Technologies.

Pagano added that with expanding interest in CubeSats and smaller Nanosats, the sector may now seek to hold a full CubeSat conference every year at the San Diego SPIE meetings. For now, the next one is set for 2018.

He said experts on weather prediction are turning to CubeSats for more versatility in measurement, at a small fraction of the costs – now as low as under $10 million for the spacecraft, payload and instruments. “And we are making the same measurements,” he told his plenary audience.

“CubeSats can be the answer to our funding problems,” Pagano added. “There’s not a lot of money to fund CubeSats, but we are getting there.” In a CubeSat launch, Pagano explained, the payload is often spring-loaded on the back of a larger satellite and effectively “popped out”.

Hedged risk
NASA is starting to complement its old weather satellite program with the much smaller space hardware inside CubeSats, which offer improved methods and new applications for drought prediction, monitoring weather hazards for the aviation industry, or monitoring environmental shifts that may contribute to vector-borne diseases like malaria.

The CubeSat community sees distribution of tasks to launches of several small satellites, each one with its own payload, as an important hedge against risk, avoiding the more conventional “all eggs in one basket” approach. “It makes the whole program more robust to failure,” Pagano noted.

And satellites do fail. Imaging instrumentation on board a Landsat payload failed in 2003, while in February 2009 NASA’s original Orbiting Carbon Observatory, or OCO, fell into the Indian Ocean near Antarctica after its payload failed to separate.

Pagano estimated that more than a hundred CubeSats have flown over the last decade or so, including commercial launches, university missions and more.

“It’s a brand new field, [and] we are just starting,” he said. “We expect to see lots more science in CubeSats, with more capable payloads.”

New interest is surfacing in the planetary community, Earth science, and in commercial imaging – for what Pagano calls “big science in a little package,” using more affordable sensors. “It’s not just a government-only club anymore,” he said.