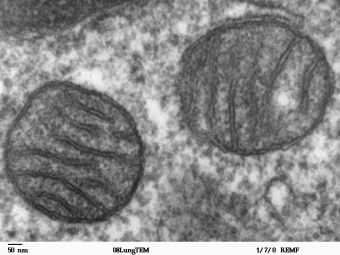 The number and structure of mitochondria present in skeletal muscle tissue is thought to be a factor in several aspects of muscle function and well-being, so accurate imaging of those mitochondria under various metabolic demands could provide useful information for clinicians about specific illnesses or general health.

To date, imaging methods applied to the task have included the use of fluorescence microscopy along with both transmission- and scanning electron microscopy, although these methods involve more complex sample preparation than is desirable.

A research team at Tokyo's University of Electro-Communications has developed a possible alternative, involving photothermal imaging (PT). The results were published in Biomedical Optics Express.

The project's photothermal microscopy platform uses a pump laser at 488-nm wavelength to photo-excite the mitochondria being analyzed, and then a 638-nm probe pulse to detect the resulting change in refractive index, which can be used to construct an image.

In its paper, the team note that the technique exploits the strong optical absorption of cytochrome c, a protein found within the mitochondria, and so does not require any added labeling operation that might distort the structures of interest, or other complicated sample preparation methods.

"The principle of the PT imaging technique is well known, but it has to date not been extensively used in actual applied imaging situations," Takayoshi Kobayashi of the University of Electro-Communications told Optics.org.

The team's published findings showed that mitochondrial structures were clearly resolved in its PT images with higher contrast than in conventional bright field images. They also suggested that this instrumental method should be applicable to tissues in which there is a lower concentrations of cytochrome c than those involved in this study.

To prove the simplicity of sample preparation, the PT method was also applied to bare muscle pieces peeled from the thigh of a live rat, where structural detail of the mitochondria was still clearly visible in a sample of around 500-microns thickness.

"In our platform the high sensitivity and small laser spot size ensures that thermal diffusion is sufficient to remove any heat generated and avoid tissue damage," commented Takayoshi Kobayashi. "This does involve a certain trade-off with the resulting signal-to-noise ratio, but in comparison with fluorescence microscopy, this PT technique is much more robust."